About T.M. Maple
T.M. Maple was the pseudonym of Jim Burke (1956-1994), a fan who wrote more than 3,000 letters to comic book letter columns between 1977 and 1994. Burke’s letters were quite popular among readers as well as editors, and he wrote prolifically to a diverse number of comic publishing companies and titles. Burke originally signed his letters as “The Mad Maple,” but Marvel Comics editor Tom DeFalco abbreviated it to “T.M. Maple” to make it sound like a real name (thus circumventing a new policy at the company to stop printing letters submitted under pseudonyms). Burke took a liking to the new name and began using it exclusively (including variations like “Theodore Maddox Maplehurst”) until 1988, when in Scott McCloud’s Zot! #21 he revealed his real name. Burke published a fanzine about comics in the late 1980s. With artist/publisher Allen Freeman, Burke co-created the superhero Captain Optimist. Jim Burke had a fatal heart attack in 1994. 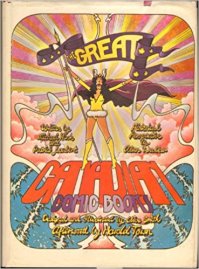 MICHAEL HIRSH (1948-) AND PATRICK LOUBERT (1947-)
– Authors of the book The Great Canadian Comic Books, published in 1971, which looked primarily at the Canadian Whites, comics published in Canada during World War II. Hirsh and Loubert acquired the Bell Features archives and reprint rights for the comics, which included Nelvana of the Northern Lights and Johnny Canuck, from Bell’s capital investor John Ezrin. The archives included copies of the comics, original artwork and more which were used as the foundation for the book. It was followed by a two-year touring gallery exhibit ‘Comic Art Traditions in Canada, 1941-45.’ They would go on to form animation studio Nelvana, Ltd. (named after Adrian Dingle’s character) with Clive Smith and would later donate the material from Bell Features to the National Archives where they reside to this day, preserving part of our national comics heritage. Without their efforts, recent collections of Adrian Dingle’s Nelvana and Leo Bachle’s Johnny Canuck would not have been possible.

– Rob or Bob as he was known to his friends and customers, was a long-time fixture on the Toronto comics scene as a comics retailer and fan. At his Danforth Avenue store Shining Knight Comics, later rebranded Comics & More, Bob believed strongly that the local comics shop should be active in, and support the local community. He sponsored many local teams, schools and young people’s organizations. In the summer of 2014 he was diagnosed with brain cancer and began treatment, but succumbed to the disease in late 2014, he was 54 years old.

John Bell (1952-)
John Bell was born in Montreal in 1952. When he was ten he moved with his family to Halifax and has since always considered himself a Maritimer. After 26 years as an archivist for the National Archives in Ottawa, Bell retired in 2008 to Lunenberg and has based himself there. John Bell has published over 20 books as a cultural historian working in the areas of Canadian Science Fiction, Atlantic Canadian Literary History, Canadian baseball writing, Canadian pulp magazines, Canada’s connection with the American

Civil War and, most importantly for the Shusters, three books on Canadian comic book history His Canuck Comics (1986), Guardians of the North (1992), and Invaders from the North (2006) have become essential reading and classic source books in the field.  Between the mid-70s and mid 90s, Bell collected every comic book published in Canada and this collection along with his collection of Canadian war-time comics, Canadian original comic art, and Bell Features correspondence were all donated to the National Archives and serve as a rich repository of information in the field. He is currently editing a collection of memoirs from the First World War and working on a guide to vintage Canadian non-sports cards.

In 1968, Captain George Henderson – owner of Canada’s first comics shop, Memory Lane, had brought Stan Lee to the city for the Triple FanFair (no doubt inspired by the convention of the same name that had been taking place in Detroit around the same time – the three fandoms in the name being science fiction, movies and comics). That event took place in tents on Markham Street (former home of Memory Lane and later, the Beguiling).

For the most part Canadian comic fans of this era in this region had to pile in a car and drive to Detroit, Chicago or primarily New York to attend a comic book convention.

What happened at York University was pretty amazing and was the highlight for many young fans, a lot of whom would go on to work in comics or related activities and it came together at Winters College at Toronto’s York University due to the vision and perseverance of the event’s founder Ken Ketter, with the assistance of people like Ronn Sutton, Ron Kasman, Mark Segal and Gloria Agnew.

Mark Askwith (born April 6, 1956) is a Canadian producer, writer, interviewer (and sometime-publisher/editor), and a familiar name in the fields of science fiction and comics.

After working at Oberon Press, and Coach House Press, between 1982 and 1987, Askwith managed one of the premiere North American comic book stores – The Silver Snail in Toronto. Situated at that time opposite the Bakka-Phoenix Science Fiction Bookstore, it provided an opportunity to soak up the comics/Sci-Fi atmosphere, and allowed Askwith to meet legendary (and local) Science Fiction and comics authors, including Frank Miller and Bill Sienkiewicz.

Leaving the Silver Snail in 1987, he started work on a Prisoner comic with Dean Motter (below), and worked in an art directorial supportive role on Ron Mann’s comics documentary Comic Book Confidential (Sphinx Productions, 1988), an overview/history of the comic book medium in the U.S.A, from the 1930s to the ’80s. The documentary featured interviews with such noteworthy individuals as Charles Burns, Art Spiegelman, Françoise Mouly, Frank Miller, Stan Lee, Will Eisner, Robert Crumb, Harvey Pekar, and William M. Gaines. The success of the documentary inspired Askwith to expand upon some of Mann’s ideas into a television magazine programme which would similarly explore areas of fan interest (comics, Science Fiction, horror, etc.) largely through interviews and commentary. The programme was called Prisoners of Gravity.

In 1989, Askwith became a full-time television producer and writer, and one of his first programmes was Prisoners of Gravity. The brainchild of Askwith, Daniel Richler, and Rick Green (who also hosted the programme), Prisoners of Gravity was a Canadian news magazine program that explored speculative fiction, specifically Science Fiction, Fantasy, Horror and Comics. Produced by TVOntario, the series ran for 139 episodes over five seasons.

The establishing framework for the programme is not dissimilar to that of its similarly-targeted peer Mystery Science Theater 3000, both featuring a stranded host who ostensibly broadcast the programme themselves from isolation. The similarities largely end there, however. MST3K was a comedy programme that focused each episode on a particular film and provided running gag commentary on it. Prisoners of Gravity ran a series of interviews with authors and creators from the science fiction and comics communities, with the host linking the subject matter together and focusing down on a specific topic for that episode.

Episodes from the first season (broadcast between August 1989 and March 1990, and now believed largely missing/wiped) reportedly focused on areas including UFOs, Star Trek and Comic book conventions. The subsequent four seasons (preserved, and available for viewing by appointment at The Merril Collection of Science Fiction, Speculation and Fantasy[1] public library located in downtown Toronto, Ontario, Canada) often featured episodes on much more specific topics. These included “Will Eisner & The Spirit”, “Watchmen”, “Cyberpunk”, “Ray Bradbury”, “The Sandman”, “Tolkien” and Jack Kirby” among many others.

Many of the interviews for these programmes (including specific interviews with Watchmen creators Alan Moore and Dave Gibbons, and Sandman author Neil Gaiman) were apparently carried out by Askwith himself.

Prisoners of Gravity first aired on TVOntario and ran for five seasons and 139 episodes before being canceled in 1994. Many of its episodes were subsequently syndicated, and have appeared (briefly) on PBS, The Discovery Channel and Space, of which Askwith is one of the founding producers.

Askwith was one of the founding producers of the channel, which was licensed by the Canadian Radio-television and Telecommunications Commission (CRTC) in 1996, and debuted on October 17, 1997 at 6:00 p.m. EST, under the ownership of CHUM Limited. Askwith is particularly involved in the documentary side of things, and the so-called ‘interstitial’ materials which pepper the channels’ output. The first of which was a comment on the channels first-broadcast film Forbidden Planet by noted Canadian Science Fiction author Robert J. Sawyer.

He has produced – and appeared in – SPACE’s HypaSpace Daily/Weekly, an entertainment news show which looks specifically at the Science Fiction news, which was later renamed InnerSpace.

Askwith has dabbled in writing himself, mostly comics.

Most notably, his collaboration with Dean Motter in helping write the authorized “The Prisoner” sequel met with considerable critical and fan-approval. The four-part prestige-format mini-series, serialized between 1988 and 1989 has subsequently been collected in graphic novel format as Shattered Visage, still in print (since 1990) and published by DC Comics/Warner Bros. in the US, and Titan Books in the UK.