Original bio – Please note: when Ley Fortune was inducted into the Hall of Fame, very little information was available on her life outside of comics. Presented first is our original biography as presented in 2016:

Ley Fortune was an artist working for the first Canadian comic book publisher, Maple Leaf in the 1940s. She drew among others covers and features like ‘Mono The Air Cobra’ for Rocket Comics (which would become known as ‘Bush Pilot’ after the war), as well as ‘Circus Girl’ and ‘Caribou Trail’. Ley Fortune was a pen name for Shirley Fortune, who was a student of Jack Shadbolt at the Vancouver School of Art in 1938-39. Fortune would also work on the strip Brok Windsor, created by Jon St. Ables.

Updated Biography: Shirley, aka ‘Ley’ Fortune, was born in 1921 and grew up in Salmon Arm B.C.

Her father Robert Fortune and her Colombian mother Stella Prince who was a nurse, met and married in NewYork City. The family including Shirley’s younger brother moved to Vancouver in 1933. In 1938, Shirley began attending the Vancouver School of Art with acclaimed West Coast artist Jack Shadbolt as instructor. Two years later she graduated and worked as a commercial artist for several employers such as Addressograph-Multigraph Sales Co. and Famous Players Theatre. 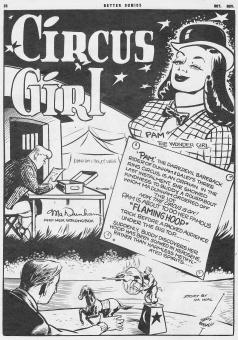 In the summer of 1943 she joined Harry Smith’s Maple Leaf Comics. Her first cover illustration appeared on Rocket Comics in the Fall of 1943. She was best known for drawing “Mono The Air Cobra” written by Ted Ross. She also drew “Circus Girl” a mystery adventure. With Ted Ross she began “Caribou Trail”, set in British Columbia’s Caribou country, but this serial was short lived due to the demise of the company. She also assisted with pencils and inks on other stories. She was valuable enough to the company to be one of the last survivors as the company progressively ceased operations.

After the demise of Maple Leaf Comics Shirley returned to commercial art. We catch glimpses of her: exhibiting a drawing (not a cartoon) in a group art show in the Vancouver Art Gallery in 1946 and working for Uneeda Printers in 1948.

About 1950, she married Allen J. McIntyre a police officer and they had a son. Over the years she endured poor health and her marriage broke up. However, she continued to draw and paint for her own enjoyment. In her sixties she took up correspondence with her former teacher and friend Jack Shadbolt.