Inducted into the Hall of Fame in 2005

Hal Foster, born Harold Rudolf Foster, was born in Halifax, Nova Scotia, Canada on August 16, 1892. By the age of 8, he already had the sea in his blood, and he rowed a twelve foot plank (more often, misquote d as a raft) across Halifax harbour. This is folklore often quoted in local Halifax comics circles. Two years later, Foster was at the helm of a 30 foot schooner on the Atlantic Ocean. He was but 4 years old when his father passed on; his mother married once again eight years later. His stepfather shared his joy of the outdoors in the forests that surrounded Halifax in those days, and they often fished together. By 1906, the family business went under and the family moved to Winnipeg. Hal Foster’s last completed year of grade school was grade 9 (age 13).

At the Winnipeg Carnegie Library, Hal studied anatomy, later becoming a staff artist at The Hudson’s Bay Company. His role there was illustrating women’s lingerie, back then, the type plumed with lots of buttons, lace and fasteners, for their catalogue. Prior to World War Two, an economic depression set in, and Foster was forced to freelance out his artistic skills. He married Helen Wells in 1915 who he met that same year. They worked as hunting guides in Ontario and Manitoba. In 1917, they founded a claim in the Lake Rice area and commenced prospecting for gold. This they did for three years until such time as claim jumpers stole it out from under them, forcing them off the land. Hal Foster made a firm decision at this time to embark full-time upon a career as an artist. Talking a friend into a bold plan, they jointly set out together on bicycles on a 1,000 mile pilgrimage from Winnipeg to Chicago! They arrived in a record 14 days in 1919.

Foster became employed with the Jaln & Ollier Engraving Company, and he attended evening classes at the Chicago Art Institute. Later, he attended both the National Academy of Design and the Chicago Academy of Fine Arts. Following this, he worked for the Palenske-Young Studio doing ads in addition to covers of magazines. These included the Northwest Paper, Southern Pacific Railroad, and the Illinois Pacific Railroad, to name just a few.

Hal Foster was the very first artist to illustrate the Edgar Rice Burroughs’ Tarzan newspaper strip, which commenced on Jan.7, 1929. He did approximately 300 of these before his return to advertising. This is where Foster’s well-known nom-de-plume of “The Father of The Adventure Strip” originated. Hal Foster is credited as being the originator of text accompanying comic strip illustrations, in place of word balloons, leaving his well-delineated illustrations uncluttered by captions and text. This became Foster’s hallmark. During the Depression of the 1930’s, Hal Foster found it increasingly difficult to make a living in advertising; work was drying up in this field as a result. He was therefore persuaded by an agent of Edgar Rice Burroughs, to return to Tarzan, this time to the weekly Sunday page. In 1937, Foster went to The United Features Syndicate, with his well-structured Derek, Son of Thane newspaper strip concept, with hundreds of conceptual drawings and notes. The title was later changed to Prince Arn, and then, later, to Prince Valiant. United Features Syndicate, however, turned the feature down! Foster then took it directly to the world-renowned tycoon newspaper magnate William Randolph Hearst. “Prince Valiant in The Days of King Arthur” first saw print on Feb.13, 1937. Additionally, Hal Foster illustrated the book The Young Knight (1945), and earlier, in 1943, had adapted the book The Song of Bernadette, in illustrated form. 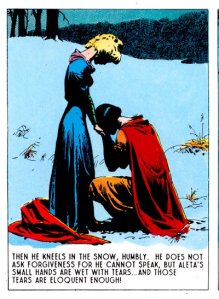 Awards won by Foster: the Banshees’ “Silver Lady” award, in 1952; both the National Cartoonist Society’s “Reuben” in 1957, and later the “Gold Key” award in 1977. At the age of 73, Foster was inducted into membership in England’s Society of Arts. In total, Hal Foster produced 1,764 Prince Valiant pages over his career! The last page created solely by Foster appeared on May 16 of 1971. Thereafter, he chose John Cullen Murphy from a group of other highly-qualified, well known professionals, to carry on the strip. However, Foster continued to do layouts, write and colour the strip for an additional nine years, until Feb 10 of 1980. Hal Foster passed away on Jul.25, 1982, just three weeks before his 90th birthday.

Hal Foster’s Prince Valiant in the Days of King Arthur continues to be published to this day, and the current custodians are Mark Schultz (writer) and Gary Gianni (artist).

Fantagraphics is currently reprinting the Hal Foster Prince Valiant Sundays from the beginning in single, over-sized volumes that collect two year’s worth of strips per hardcover. 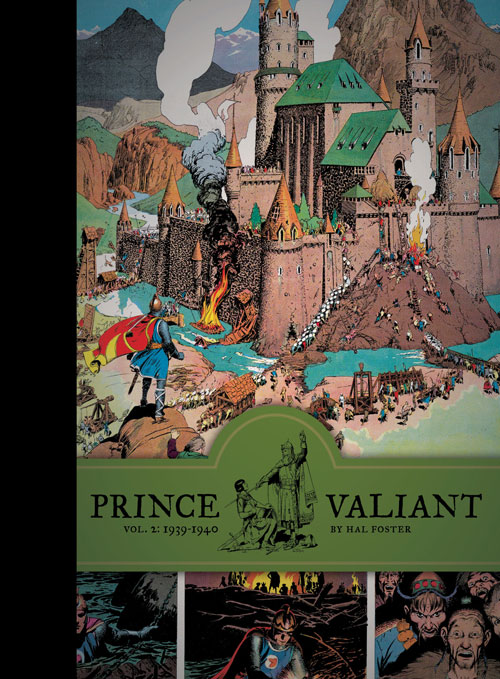