Kean Soo has just posted on his blog that Jellaby vol. 1, winner of the 2009 Joe Shuster Comics for Kids Award, is going out of print!

It saddens me to report that the first volume of Jellaby will not remain in print. This means that it will becoming increasingly difficult to find copies of Jellaby in the more traditional retail outlets like book or comic stores.

While Jellaby vol. 2 is currently in print, having only the second half of a two part story in print is, to put it mildly, a strange decision.

So what is the future of Jellaby?

What this means for the future of Jellaby, at least in the short term: any plans for a third volume or a short story collection are on hold indefinitely until the rights issue is sorted out. I personally would love to sort things out and work on Jellaby again with the fine folk at Disney-Hyperion … I wouldn’t hesitate at all for a chance to work with them again.

Kean mentions his intention to continue to do short stories in the Flight and Explorer anthologies, which is great to hear.

This is really quite disappointing, especially considering the affection I and many others have for this project and the fact that this particular book was highlighted as the best comic book for a young readers audience (The 2009 Comics For Kids Joe Shuster Award winner).

A stand out work that is suddenly considered non-viable? That’s quite odd.

Here is a little bit of breaking news for you: Jellaby is now sold out at Diamond. To show support for this book, before it was completely sold out Jennifer Stewart of The Dragon, sponsor of the Comics for Kids award, purchased every remaining copy of the book available through Diamond. We here at the Joe Shuster Awards also have a finite number of copies at our disposal and between us, the Dragon, as well a number of Canadian retailers we are in contact with, there are still some copies available. Please contact me at robert@joeshusterawards.com if you cannot locate a copy with your local comics retailer. It is highly recommended. 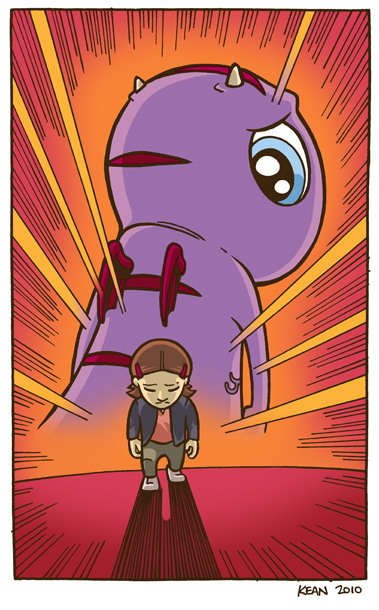