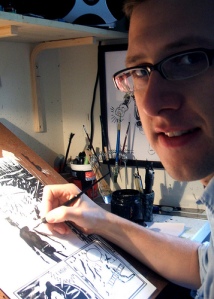 Recently named one of Wizard Magazines 25 “rising stars” Jeff has also published the graphic novel The Nobody for DC Comics/ Vertigo, and is currently hard at work a new monthly ongoing series, Sweet Tooth, also for Vertigo and a new graphic novel for Top Shelf.

Jeff has also illustrated album covers for such bands as Art Brut and catl. His work has also been published by the likes of Dark Horse Comics, Image Comics, Driven Magazine and soon Marvel Comics.

Jeff currently lives and works in Toronto with his wife, sculptor Lesley-Anne Green and their son, Gus.