Dave Sim was born in Hamilton, Ontario in 1956 and grew up in Kitchener, where he still lives. During the early 1970s, Sim emerged as one of the most influential figures in early Canadian fandom, editing Now and Then Times and contributing to Comic Art News and Reviews, The Comics Report, Dark Fantasy, and other fanzines. Initially, Sim made his mark as a writer, but eventually, with encouragement from Gene Day, he became one of the best Canadian semi-pro artists of the mid-1970s. 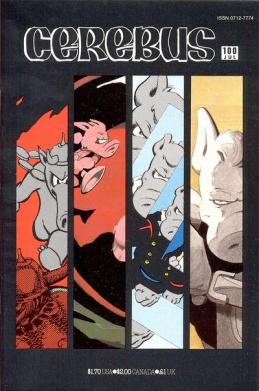 In 1977 Sim began publishing Cerebus the Aardvark, the comic book that would change his life and transform modern comics. Although it began as a clever sword-and-sorcery parody, Cerebus later evolved (with assistance from Sim’s collaborator, Gerhard), over nearly three decades, into a sophisticated work of art, an ambitious and complex 300-issue graphic novel exploring not only the comics medium, but also other facets of popular culture and society at large, not to mention Sim’s personal life. The longest-running comic in Canadian history, it is truly unique and stands as one of the country’s greatest achievements in comic art, one that has deservedly received international acclaim, including the Eisner, Harvey, and Joe Shuster awards.

Cerebus also eventually became a source of much debate within the comics community, as readers responded to Sim’s provocative narratives and editorial commentaries. While Sim’s contrarian opinions are certainly open to debate, his longtime role as an innovator, mentor, and advocate for artists’ rights are not. No other creator has made a greater contribution to the development of Canadian comics. Dave Sim was inducted into the Canadian Comic Book Creator Hall of Fame in 2006.

In 2008 Sim returned to comics with two new projects, Glamourpuss and Judenhaas, for which he received the 2009 Joe Shuster Award for Outstanding Cartoonist. In 2009 he also launched a new title, Cerebus Archive. Unfortunately Cerebus Archive did not get the orders needed for Diamond Distributors and Sim has taken the production of new issues to print-on-demand. Recently, Sim launched a new website – Cerebus TV – which broadcasts a new show every week focusing on comics and comics creators.

The piece shown above one of over 40 original art pieces featuring Wolverine donated to the Joe Shuster Awards for the Visions of an Icon Art Show and Sale by Canadian artists. The pieces were exhibited twice in 2009 – at the Joe Shuster Awards Ceremony in September and at the Speakeasy Comic Art Show in November. The original art pieces will be auctioned off on eBay in March 2010. Watch for announcements on this site!

One thought on “Visions of an Icon: Wolverine by Dave Sim”