When considering what makes an Outstanding Comic Book Publisher the nominating committee looks at things such as: quality and diversity of material published, production values, artistic quality, as well as originality of the material. We are fortunate here in Canada, as evidenced by the five nominated publishers, to have an industry that supports the creative voice of Canadian comic creators who produced a wide diversity of works in 2009.

2010’s Outstanding Publisher is Montreal’s La Pastèque (which translates in English as The Watermelon).

Established in July 1998 – and launched with the publication of Sputnik, tome 1 in December of that same year, Montreal publisher La Pastèque emerged from discussions that Frédéric Gauthier and Martin Brault participated in at Quebec comics festivals. 1997 was a pessimistic time for comics publishing in Quebec, and there was a lot of uncertainty as to the future of the medium in the Quebec market and doubt as to whether the industry would be able to sustain itself. Frédéric and Martin wanted to turn things around – and used the foundation of their company as a means to “rattle the cage” and bring a more optimistic and creative spirit to BD publishing in Quebec.

They favored a renewal of interest in great comics by adopting a few different commercial and artistic practices to make it viable in Quebec to publish Bande dessinée of a more personal nature. They felt that, with the  changes that were occurring around the world in the comics publishing world, that there was an audience for great graphic albums by Quebecois creators with unique visions like some of the great creators who had emerged from the Franco-Belgian traditions and the North American independent comics scene.

Their choices of who to publish, and the publications themselves eloquently embody their editorial approach. Martin and Frédéric say that the essence of their passion for great comics is evident in the works that they have published to date. Twelve years and more than seventy-five titles later, they have more than demonstrated that their intuitions were correct.

La Pastèque had a wonderful year in 2009, releasing a number of fantastic works from a group of top notch creators, three of whom were nominated for Joe Shuster Awards in 2010.  La Pastèque is a leader in publishing original Bande dessinée, some of which is later translated into other language by other publishing companies, such as the Paul series by cartoonist Michel Rabagliati (published in English by fellow nominee and past winner Drawn & Quarterly). They have also revived some older graphic album series such as Godbout & Fournier’s Red Ketchup and Eid’s Jérôme Bigras.

The roster of talent involved, the quality of work produced and the fantastic production values on their books made this a very easy selection for the Joe Shuster Awards Jury.

La Pastèque acknowledges the support of the Canada Council for the Arts, the Government of Quebec’s tax credit program for support of book publishers and the Société de Développement des Entreprises Culturelles (SODEC). 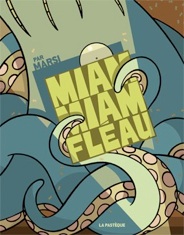 The Outstanding Canadian Comic Book Publisher Award was presented on June 5, 2010 as part of the 6th Annual Joe Shuster Awards Ceremony by Jeff Brown, the Comics Editor and Co-creator of the website dorkshelf.com. Jeff was also a member of the Nominating Committee.