Tangles: A story about Alzheimer’s, my mother, and me 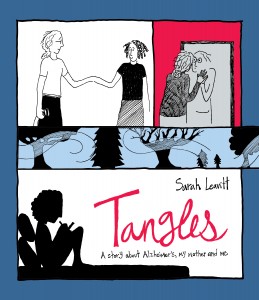 What is the book about?

What do you do when your outspoken, passionate, and quick-witted mother starts fading into a forgetful, fearful woman? In this powerful graphic memoir, Sarah Leavitt reveals how Alzheimer’s disease transformed her mother Midge—and her family—forever.

In spare black and white drawings and clear, candid prose, Sarah shares her family’s journey through a harrowing range of emotions—shock, denial, hope, anger, frustration—all the while learning to cope, and managing to find moments of happiness. Midge, a Harvard-educated intellectual, struggles to comprehend the simplest words; Sarah’s father Rob slowly adapts to his new role as full-time caretaker, but still finds time for word-play and poetry with his wife; Sarah and her sister Hannah argue, laugh, and grieve together as they join forces to help Midge get to sleep, rage about family friends who have disappeared, or collapse in tears at the end of a heartbreaking day.

Tangles provides a window on the complexity of Alzheimer’s disease, and gradually opens a knot of moments, memories, and dreams to reveal a bond between a mother and a daughter that will never come apart.

I spoke with the publisher about the book, the first true graphic novel published by Freehand Books.

Sarah Leavitt came through the much lauded UBC Creative Writing program. Tangles was her MA thesis, a first for the program. Sam Haywood, of the Creative Rights Agency, brought the book to Freehand Books believing it fit the publishers mandate: to publish excellent Canadian literature. This is her first book.

I can tell you, having discussed with Freehand their current marketing campaign and long term goals, that the publisher is working hard to get this book into comic book shops across Canada. They are very excited about producing this graphic non-fiction story and see it as a nice first step to a broader graphic novel portfolio. In fact, a second graphic novel is currently in the works (featuring artwork by a young, upcoming and past Joe Shuster Award nominee) for release in 2011.

Tangles: A story about Alzheimer’s, my mother, and me by Vancouver author Sarah Leavitt has been shortlisted for the $25,000 Writers’ Trust Non-Fiction Prize. Tangles is the first work of graphic literature ever to be shortlisted for the prestigious award.

Upon receiving the news, Leavitt commented: “I am thrilled for Tangles and also excited that graphic memoir was included in the finalists. I think it’s great that the jury recognized graphic non-fiction as part of the non-fiction genre.”

Established in 1997, the Writers’ Trust Non-Fiction Prize recognizes Canadian writers of exceptional talent for the year’s best work of non-fiction. The winner will be announced at the Writers’ Trust Awards, hosted by Shelagh Rogers, at the Isabel Bader Theatre in Toronto on November 2, 2010.

Tangles was published on September 1, 2010 by Freehand Books, based in Calgary, Alberta. In this powerful graphic memoir, Leavitt reveals how Alzheimer’s disease transformed her mother Midge—and her family—forever. In spare black and white drawings and clear, candid prose, Leavitt shares her family’s journey through a harrowing range of emotions—shock, denial, hope, anger, frustration—all the while learning to cope, and managing to find moments of happiness. Brian Fies, acclaimed author of Mom’s Cancer, says of Tangles: “Sarah Leavitt uses the medium of comics to tell her story with more economy and power than either words or pictures could muster by themselves. She brings a good eye for the telling detail—the small observations that reveal larger truths—to her memoir of a family in crisis. Tangles is the work of a perceptive, creative, and honest storyteller.”

Sarah Leavitt writes both prose and comics and lives in Vancouver, BC. Her writing has appeared in Geist, The Globe and Mail, Vancouver Review, The Georgia Straight, and Xtra West. Leavitt has written short documentaries for Definitely Not the Opera on CBC Radio, and her non-fiction has appeared in a number of anthologies, including Nobody’s Mother (Heritage 2006) and Beyond Forgetting: Poetry and Prose about Alzheimer’s Disease (Kent State University Press 2009). She has an MFA in Creative Writing from UBC. Tangles is her first book.

My copy is on it’s the way, and I will have a review posted in the near future as part of a new feature which highlights books, comics and zines I think are overlooked by the comic retailing market.