BRIGHTEST DAY #17-18
Written by GEOFF JOHNS & PETER J. TOMASI Art by IVAN REIS, PATRICK GLEASON, ARDIAN SYAF, SCOTT CLARK & JOE PRADO
Covers by DAVID FINCH & SCOTT WILLIAMS
Variant cover by IVAN REIS & OCLAIR ALBERT
1:10 Variant covers by IVAN REIS
Hawkman and Hawkgirl pay a visit to the Star Sapphires, but with the Hawks’ connection to the cosmic corps, it looks like this meeting may end in bloodshed. And more even more blood may be drawn as Captain Boomerang hunts down Deadman and Dove!
Retailers please note: These issues will ship with two covers each. Please see the Previews Order Form for more information.
Issue #17 on sale JANUARY 5
Issue #18 on sale JANUARY 19
32 pg, FC, $2.99 US

KNIGHT & SQUIRE #4
Written by PAUL CORNELL
Art by JIMMY BROXTON
Cover by YANICK PAQUETTE & MICHAEL LACOMBE
The Knight battles against his own armor – in his own castle! Elsewhere, Squire struggles with romance and the possibility that she’s being set up for betrayal! And meet Hank, the Knight’s very American butler…
On sale JANUARY 12 • 4 of 6 • 32 pg, FC $2.99 US 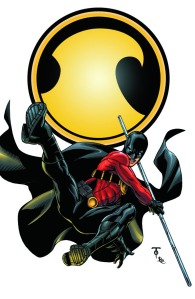 RED ROBIN #19
Written by FABIAN NICIEZA
Art and cover by MARCUS TO & RAY MCCARTHY
When Red Robin and his friends are trapped in the unknown world of the Unternet by the Calculator’s fail-safe program, it’s Batman and Robin to the rescue – but which Batman and Robin is it? If the Unternet is a telepathic communications gestalt where the villains’ dreams come true, can Red Robin become its waking nightmare?
On sale JANUARY 12 • 32 pg, FC, $2.99 US

ACTION COMICS #897
Written by PAUL CORNELL
Art by PETE WOODS
Cover by DAVID FINCH & BATT
The last place Lex Luthor expected his quest for the Black Lantern energy to take him was Arkham Asylum – specifically to the cell of The Joker! What clues about Lex’s quest could The Joker have to offer, and why on Earth would Lex trust him? Get ready for a one-of-a-kind confrontation between comics’ two greatest villains, as brought to you by the twisted minds of Paul Cornell and Pete Woods!
On sale JANUARY 26 * 32 pg, FC $2.99 US

SUPERGIRL #60
Written by NICK SPENCER
Art by BERNARD CHANG
Cover by AMY REEDER & RICHARD FRIEND
SUPERGIRL welcomes aboard writer Nick Spencer (JIMMY OLSEN, T.H.U.N.D.E.R. AGENTS, Morning Glories) and artist Bernard Chang (WONDER WOMAN, SUPERMAN) for a Girl of Steel story unlike any other! Someone is trying to kill the young heroes of the DC Universe! Who is this villain, and how can Supergirl stop him? Maybe her friends can help – namely, Batgirl, Blue Beetle, Miss Martian, Static and…Robin?! Buckle up, folks, because this one puts the pedal to the metal on page one and doesn’t let up for a second!
On sale JANUARY 19 * 32 pg, FC, $2.99 US

SUPERMAN/BATMAN #80
Written by CHRIS ROBERSON
Art by JESUS MERINO
Cover by FIONA STAPLES
Okay, so not only is the 853rd century in dire peril, so is the 21st! Surely the combined might of the DC ONE MILLION Batman and Superman and the present-day Bats and Supes is enough to save the day, right? No? Shoot. Well, this looks like a job for Robin, The Toy Wonder! Written by up-and-comer Chris Roberson (CINDERELLA) with art by Jesus Merino (JUSTICE SOCIETY OF AMERICA)!
On sale JANUARY 19 * 32 pg, FC, $2.99 US

THE FLASH #10
Written by GEOFF JOHNS
Art and cover by FRANCIS MANAPUL
1:10 Variant cover by SCOTT KOLINS
The prelude to next summer’s FLASHPOINT event continues! The new speedster known as Hot Pursuit has arrived on his Cosmic Motorcycle, but what terrible warning has he brought with him? The FLASHPOINT is closing in, and it looks like no one will be safe!
Retailers please note: This issue will ship with two covers. Please see the Previews Order Form for more information.
On sale JANUARY 26 • 32 pg, FC, $2.99 US

R.E.B.E.L.S #24
Written by TONY BEDARD
Art by CLAUDE ST. AUBIN & SCOTT HANNA
Cover by FRANCIS PORTELA
Two years ago, super-genius Vril Dox gathered his team of R.E.B.E.L.S. to fight off one seemingly unbeatable foe: Starro the Conqueror. Now, Starro is back for revenge, and Dox’s downfall has begun!
On sale JANUARY 12 • 32 pg, FC, $2.99 US

BATMAN: TIME AND THE BATMAN HC
Written by GRANT MORRISON and FABIAN NICIEZA
Art by DAVID FINCH, TONY DANIEL, ANDY KUBERT and FRANK QUITELY
Cover by DAVID FINCH and SCOTT WILLIAMS
Grant Morrison returns to BATMAN with tales from issues #700-703, illustrated by an all-star roster of artists including Andy Kubert, Tony Daniel and Frank Quitely. Don’t miss a tale that reveals secret details in The Dark Knight’s adventures following BATMAN R.I.P and the return of Bruce Wayne to Gotham City!
On sale MARCH 2 • 128 pg, FC, $19.99 US 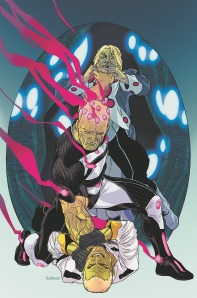 R.E.B.E.L.S.: SONS OF BRAINIAC TP
Written by TONY BEDARD
Art by CLAUDE ST. AUBIN and SCOTT HANNA
Cover by KALMAN ANDRASOFZKY
While super-genius Vril Dox begins rebuilding his interplanetary police squad L.E.G.I.O.N. in these stories from issues #15-20, Starfire joins the team! Plus, Dox confronts his father – the Superman villain Brainiac – while his own son, Lyrl, tries to destroy their home planet of Colu.
On sale FEBRUARY 2 • 144 pg, FC, $14.99 US

SUPERMAN: THE BLACK RING HC
Written by PAUL CORNELL
Art by PETE WOODS and SEAN CHEN
Cover by DAVID FINCH and JOE WEEMS
When Lex Luthor finally regained control of LexCorp, he thought he had everything he wanted. But in BLACKEST NIGHT, he briefly became an Orange Lantern and got a taste of true power. Now he’ll do anything to get that power back. Buckle in for a greatest hits tour of the DCU’s most wanted – including an appearance by The Sandman’s big sister, Death! – as Lex Luthor begins an epic quest for power in stories from ACTION COMICS #890-895, brought to you by writer Paul Cornell (Dr. Who, Captain Britain and MI-13)!
On sale MARCH 30 • 160 pg, FC, $19.99 US 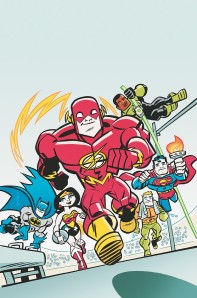 SUPER FRIENDS: MYSTERY IN SPACE TP
Written by SHOLLY FISCH
Art by DARIO BRIZUELA, STEWART MCKENNY, DAN DAVIS and J. BONE
Cover by J. BONE
Get ready for seven new SUPER FRIENDS tales from issues #22-28! The heroes race against Despero, Mongul and Queen Bee for magical artifacts, stop a plot against them hatched by the mad scientists of Oolong Island, take part in the Space Olympics, and much more!
On sale FEBRUARY 2 • 144 pg, FC, $12.99 US

ASSASSIN’S CREED: THE FALL #3
Written by KARL KERSCHL & CAMERON STEWART
Art and cover by KARL KERSCHL & CAMERON STEWART
The exciting comic book companion to the acclaimed videogame series reaches its final issue! The streets of Petrograd are filled with the color and noise of revolution – the Bolsheviks have taken control of the country, but there’s still conflict within the ranks. Assassin Nikolai Orelov confronts the abdicated Tsar Nicholas II to learn the final location of the Staff. And in the present, Daniel Cross completes his pilgrimage to find the elusive Mentor of the Assassins, a quest that changes the Order forever…
On sale JANUARY 12 • 3 of 3 • 40 pg, FC, $3.99 US MATURE READERS

SWEET TOOTH #17
Written by JEFF LEMIRE
Art and cover by JEFF LEMIRE
The war between the cult army and the militia erupts as Jepperd finally encounters Abbot in his insane attempt to rescue Gus. Not everyone’s making it out of this one, and those that do survive will never be the same. The next stage of the SWEET TOOTH saga begins here!
On sale JANUARY 5 • 32 pg, FC, $2.99 US MATURE READERS