All things considered, April seems like a quiet month. Action Comics reaches it’s 900th issue, Flashpoint kicks off in May, Fiona Staples’ issue of Jonah Hex comes out and for some reason Infinity, Inc. is getting the hardcover treatment.

THE FLASH #12
Written by GEOFF JOHNS
Art and cover by FRANCIS MANAPUL
1:10 Variant cover by GEORGE PEREZ
“The Road to Flashpoint” concludes as everything Barry Allen knows and cares about is lost. What is the Flashpoint? Find out in the upcoming FLASHPOINT #1!
Retailers please note: This issue will ship with two covers. Please see the Previews Order Form for more information.
On sale APRIL 27 • 32 pg, FC, $2.99 US, RATED T

ACTION COMICS #900
Written by PAUL CORNELL, RICHARD DONNER, DAVID GOYER, DAMON LINDELOF and more
Art by PETE WOODS, JESUS MERINO and more
Cover by DAVID FINCH
1:5 Variant cover A by ADAM HUGHES
1:5 Variant cover B by ALEX ROSS
Superman returns to ACTION COMICS just in time for the title’s historic 900th issue, which clocks in at 100 pages! Everything Paul Cornell and Pete Woods have been building to over the last year culminates here in the ultimate Superman vs. Lex Luthor battle! But that’s not all – this story will lay the grounds for an insanely epic story coming out this summer in the pages of ACTION!
Plus, an incredible roster of guest talent help us celebrate this landmark issue, including the screenwriter of The Dark Knight, David Goyer; famed Superman: The Movie director Richard Donner; the co-creator of Lost, Damon Lindelof; and the creative team behind the hit DC UNIVERSE ONLINE game!
Retailers please note: This issue will ship with two covers. Please see the Previews Order Form for more information.
On sale APRIL 27 • 96 pg, FC, $5.99 US, RATED T

SUPERBOY #6
Written by JEFF LEMIRE
Art by MARCO RUDY
Cover by EDDY BARROWS & J.P. MAYER
The epic “Reign of Doomsday” crossover hits SUPERBOY! How will the Kid of Steel defeat the monster that managed to kill the Man of Steel? And what is Doomsday’s ultimate goal in attacking all these members of the Super-family? The mysteries deepen as Act I of this story rockets towards its conclusion!
On sale APRIL 13 • 32 pg, FC, $2.99 US, RATED T

BATMAN: THE DARK KNIGHT #5
Written by DAVID FINCH
Art by DAVID FINCH & SCOTT WILLIAMS
Cover by DAVID FINCH
1:25 Variant cover by ANDY CLARKE
David Finch’s brilliant take on Batman continues to explore the darker corners of Gotham City in this penultimate chapter of “Golden Dawn.” As The Dark Knight suffers one of his worst defeats, Jason Blood makes an unexpected move. With a surprise funeral and guest appearances by both Etrigan the Demon and Ragman, this series continues to heat up!
Retailers please note: This issue will ship with two covers. Please see the Previews Order Form for more information.
On sale APRIL 27 • 32 pg, FC, $2.99 US, RATED T

SUPERGIRL #63
Written by JAMES PEATY
Art by BERNARD CHANG
Cover by AMY REEDER & RICHARD FRIEND
Things are looking grim for Supergirl and friends as a treacherous new foe proves to be more powerful than they could have imagined! And if they’re going to win, Kara will have to come to terms with what it truly means to wear the “S” shield.
On sale APRIL 20 • 32 pg, FC, $2.99 US, RATED T

JONAH HEX #66
Written by JUSTIN GRAY & JIMMY PALMIOTTI
Art and cover by FIONA STAPLES
The people of Casket Canyon seemed so excited to have Jonah Hex for dinner. That’s because he doesn’t suspect that he’s supposed to be the main course! With a horrific snowstorm brewing outside and hungry cannibals at the door, Jonah Hex finds himself with one foot in the grave and the other on the dining-room table. And if the cannibals don’t kill him, the cold will! Featuring the work of up and coming artist Fiona Staples (NORTH 40)!
On sale APRIL 6 • 32 pg, FC, $2.99 US, RATED T+

JUSTICE SOCIETY OF AMERICA #50
Written by MARC GUGGENHEIM
Art by HOWARD CHAYKIN and more
Cover by FELIPE MASSAFERA
1:10 Variant cover by DARWYN COOKE
We’re celebrating the fiftieth issue with an extra-sized spectacular and a roster of artists you won’t want to miss! The team must explore a bizarre and fantastic underworld found beneath Monument Point . . . with the help of the one and only Challengers of the Unknown! And why was Senator Eagin out to get the JSA during the long-ago witch hunts against the mystery men?
Retailers please note: This issue will ship with two covers. Please see the Previews Order Form for more information.
On sale APRIL 20 • 56 pg, FC, $4.99 US, RATED T

R.E.B.E.L.S #27
Written by TONY BEDARD
Art by CLAUDE ST. AUBIN and SCOTT HANNA
Cover by AARON LOPRESTI
The behemoth known as Tribulus is unleashed in a last-ditch gambit to save team leader Vril Dox from the mind-slavery of Starro the Conqueror. Can the combined might of Lobo, Adam Strange, Starfire and Captain Comet be enough to stop Starro’s latest bid for conquest?
On sale APRIL 13 • 32 pg, FC, $2.99 US, RATED T

INFINITY INC.: THE GENERATIONS SAGA VOL. 1 HC
Written by ROY THOMAS and DANN THOMAS
Art by JERRY ORDWAY, MIKE MACHLAN, TONY DEZUNIGA, DON NEWTON, TODD MCFARLANE and others
Cover by JERRY ORDWAY
Shunned by their parents and mentors in the Justice Society of America, Infinity, Inc. is a team made up of the best and brightest new heroes from the next generation of DC Comics.
Collected at last from INFINITY INC. #1-4, ALL-STAR SQUADRON #25-26 and ALL-STAR SQUADRON ANNUAL #2, INFINITY INC. follows the adventures of the Justice Society of America’s sons and daughters as they pick up the role of crime-fighters from their parents. Denied membership by the JSA, the young cast of Infinity Inc. decides to train themselves – including heroes Power Girl, Huntress, Jade, Obsidian, Nuklon and more!
On sale JUNE 22 • 192 pg, FC, $39.99 US 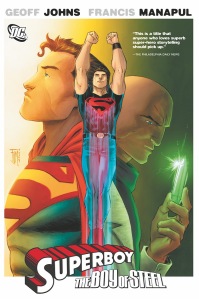 SUPERBOY: THE BOY OF STEEL TP
Written by GEOFF JOHNS
Art and cover by FRANCIS MANAPUL
Superboy is back — and he can’t wait to jump back into his life in these tales from ADVENTURE COMICS #0-3 and 5-6, plus a tale from SUPERMAN SECRET FILES 2009. But which life will it be? Conner makes a beeline for the greatest place on Earth: Smallville. While Conner reunites with his former girlfriend, Wonder Girl, Lex Luthor and Brainiac form a partnership that will cause havoc throughout the
DC Universe.
On sale MAY 11 • 144 pg, FC, $14.99 US

HOUSE OF MYSTERY #36
Written by MATTHEW STURGES
Art by LUCA ROSSI & JOSE MARZAN, JR. and DARWYN COOKE
Cover by ESAO ANDREWS
Fig and Cain have finally found the Conception, but at an astonishing cost. With Fig captured and seemingly comatose, it’s up to her friends to save her. But where are they? And more important, were they ever her friends? But if Fig’s in a coma, who’s that girl saving pirates on the high seas? A brand new story, “Desolation,” starts here, with an epic of outer space romance and adventure illustrated by the one and only Darwyn Cooke!
On sale APRIL 6 • 32 pg, FC, $2.99 US • MATURE READERS

SWEET TOOTH #20
Written by JEFF LEMIRE
Art and cover by JEFF LEMIRE
Gus reluctantly joins Jepperd on a hunt for the missing girls, but the tension between the two continues to grow. Meanwhile, Singh and Johnny come face to face with a deadly new threat, and Lucy and the girls meet Walter Fish, an enigmatic survivor who may have more to offer than meets the eye. Don’t miss snowmobile gangs, yetis and more as the new story arc “Endangered Species” kicks off with a bang!
On sale APRIL 6 • 32 pg, FC, $2.99 US MATURE READERS