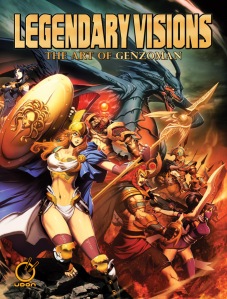 THE FANTASTIC HEROES OF LEGEND AND MYTH COME TO LIFE!

Toronto, ON – January 31, 2011 –  The heroes, villains, monsters, and gods of legend have captivated the imaginations of artists and audiences alike for millennia. Now, Chile’s premiere fantasy painter captures these larger than life figures in LEGENDARY VISIONS: THE ART OF GENZOMAN, a new art book from UDON Entertainment.

This 208-page full color volume will make an excellent addition to any mythology or art book aficionado’s collection! LEGENDARY VISIONS: THE ART OF GENZOMAN arrives in stores everywhere May 2011.

LEGENDARY VISIONS: THE ART OF GENZOMAN