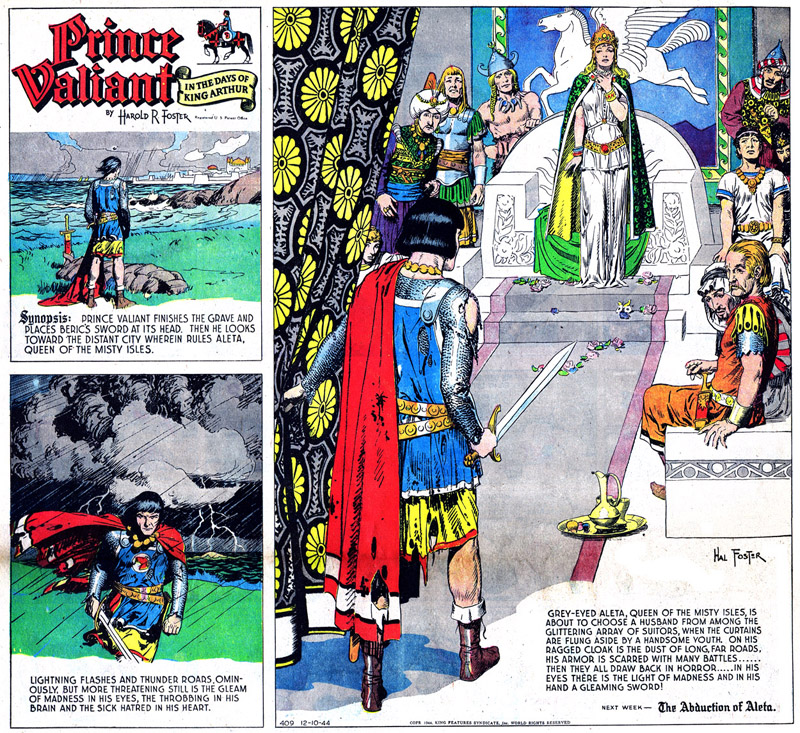 The conventional wisdom surrounding Prince Valiant these days characterizes it as a fussily drawn, belabored relic of the past.

Of course, critical judgments of a comic stop mattering once you read it. A few pages into the fourth of Fantagraphics’ beautifully reprinted new editions of Hal Foster’s masterpiece and it’s difficult indeed to remember that this isn’t the greatest comic ever. Comparisons of Foster’s work to that of more recent luminaries like Chris Ware and Jaime Hernandez are apples to oranges; readers will more than likely prefer one to the other, but there’s no convincing way to prove one kind of comic is objectively better than the other. And the mastery Foster brings to bear on his every panel may have been equaled both before and since his prime, but it’s never been surpassed. As far as long-form serialized action comics go, the only equal to Foster American comics have produced is Kirby, and Kirby was never shy about proclaiming his debts to the master.

~Matt Seneca, from his review for The Comics Journal

There are some great comments after the review from illustrator William Stout and cartoonist Paul Chadwick.

Hal Foster (1892-1982) was inducted into the Canadian Comic Book Creator Hall of Fame in the first year of these awards along with the artist after which these awards are named, Joe Shuster. When it comes to comic art illustration, Nova Scotian Hal Foster is undoubtedly Canada’s greatest and most influential export.