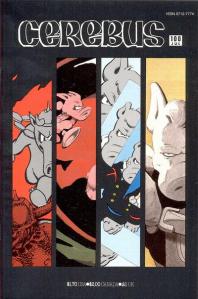 Launched a short time ago, the Cerebus High Society Kickstarter Campaign has evolved into a campaign to create full-fledged audio and visual digital editions of the Cerebus graphic novel series. At the time of writing, the campaign has nearly 700 backers and pledges of upwards of $37K, but needs to reach $200K in order to do all 300 issues. There are various financial levels of pledges, each with their own incentives (including comics, graphic novels, memorabilia, sketches and/or commissions).

Here are the messages from Dave Sim and John Scudder, who is overseeing the project and the campaign.

A MESSAGE FROM DAVE SIM:

EVERYone keeps telling me: KICKSTARTER! KICKSTARTER! KICKSTARTER! So, um, here I am as part of a event/partnership — Cerebus Digital — registered by John Scrudder in his home state of North Carolina.  You GO, TARHEELS! Okay, so John tells me I just have to sign my name and personalize CEREBUS esoterica a few thousand times and mail out a few hundred packages…

(both of which I’m definitely up for since, fortunately, they don’t require computer literacy — I still use an electric typewriter, “escargot mail”, a fax machine and landline telephone to communicate with the outside world, relying on outside help for anything Internet-based (my MacBook is only for typesetting and downloading photoreference: God Bless Google Images!!!)  I have written instructions here from John telling me how to input this.  I hope I’m doing this right)…

So, okay, John (I finally agreed). But make the pledges FUNNY.

FUNNY? he says (from which I gather than Kickstarter doesn’t ordinarily, you know, DO “funny”).

Yeah, you know — our “crazy Luddite technophobe senile dinosaur hermit routine” we do on the phone.

He goes, Are you SURE?

Oh, definitely. If you want them to even READ all these pledge descriptions the LEAST you can is entertain them.  Just think of it as $20 for writing stand-up if we pull in $6,080.  (I knew exactly what would work on him).

And now. Heeeere’s Johnny! (he gets funnier in the Rewards section, trust me).

Thanks for reading all this (assuming I actually saved it all by hitting that green button down there)!

A MESSAGE FROM JOHN SCRUDDER:

Cerebus is a unique creation in the history of comic books. This massive story, six thousand pages in total, has attained legendary status and widespread critical acclaim as one of the most artistically ambitious projects and dramatically powerful narratives in the history of the comic-book medium. Over a 26-year period From 1977 to 2004, Dave Sim (with background artist Gerhard) published 300 issues of Cerebus on a monthly basis, ultimately creating one of the longest works of fiction in the English language.

The story follows the title character, initially a Conan-parody barbarian, through the fictional world of Estarcion into the spheres of politics, high society and religion. Along the way, Cerebus earned numerous awards and accolades for its creator including Harvey, Eisner, Kirby, Ignatz, Defender of Liberty and Shuster awards. Cerebus was named the thirty-eighth greatest comic book character by EMPIRE magazine and has been cited as an influence by an entire generation of self-publishing and Indy comic -book creators.

The  primary objective of this Kickstarter project is to introduce Cerebus to a new generation of comic book fans by turning the World’s Longest Graphic Novel into the World’s Longest Audio Book with (fingers crossed) the creation of digital versions of every page of each issue of Cerebus. Every digital issue will include front covers, editorials, essays, letters and back covers and be made available as a $0.99 digital download (If this project succeeds!) In addition to digital versions of the individual comic books, Dave Sim is also providing additional audio and video content, including:

•    Sim will also provide audio-visual commentary for every issue, looking back and providing his reflections and a look at all of the relevant documents in the chronological Cerebus Archive

•    In addition, Dave Sim will also be shooting and narrating footage of his rough sketches and drawings (and translating cryptic entries) from his notebooks, as well as providing a never-before-seen “tour” close-up of the original art still in the Cerebus Archive (190 pages of the 500 page HIGH SOCIETY as an example) issue-by-issue.

With the additional audio and video content, The Digital Cerebus will enable a new audience, and those already familiar with it, to take the “closest look EVER” at this monumental achievement. An established classic in the medium will be introduced to a whole new generation of comic book fans in an expanded modern format.

But, at OVER 6,000 PAGES in the Cerebus storyline itself and almost as many pages in “back of the comic” essays, letters and editorials, this project is a massive undertaking.

THAT’S WHERE YOU COME IN!

The pages will be professionally scanned at high resolution from original artwork and film negatives.

Work has already begun on High Society, which will be available no later than the fall of 2012. Please pledge your support today and help make CEREBUS DIGITAL 6000 a reality!

Hey guys! WE’VE DOUBLED our goal in less than 24 HOURS!!! THANKS TO EVERYONE!

Dave Sim was so excited and so appreciative that he called me this morning to tell me this.

If we reach the Dream goal of 200k then Dave will be doing all of the Phone books. Each and everyone of them! (keep in mind – this will take years! :)

He also said he was going to get working on “SPECIAL” KICKSTARTER THANKS TO ALL THE BACKERS!!!

You heard right folks! Not only has Deni Loubert backed the project, but she has now agreed to do the audio tracks from her original “Note from the Publsiher” from the earliest years of Cerebus

Deni Loubert was the manager and publisher of Aardvark-Vanaheim Inc. when it started oh so many years ago!

So this is very exciting news!! this project keeps on taking new shapes and forms and we’re just a little beyond the 24 hour mark!! How amazing can this project become?!