The Nelvana of the Northern Lights: Canada’s First Superheroine Kickstarter campaign ended early this morning, raising an astonishing $54,876 (more than double the $25K amount original targeted). Organizers Hope Nicholson and Rachel Richey now have the task of finding, scanning and upgrading the scarce originals for publication, but the announced target date for release of the book is April 2014, with a reproduction of the colour Nelvana issue planned for a January 2014 release. We look forward to seeing the end results next year. 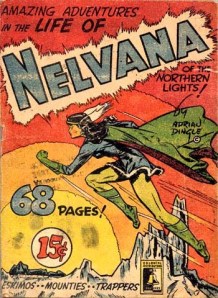 And as one campaign ends, another begins. The True Patriot team has launched the crowdfunding campaign for True Patriot 2, this time on Kickstarter (last time it was on Indiegogo). Pretty much the same crew is back for volume 2, with some new faces on the team like Paul Rivoche (co-creator of Mister X). The campaign went live earlier today and has already reached 21% of it’s desired funding target. We’re hosting a launch party for the campaign tonight (November 1) at my store, the Comic Book Lounge at 587A College Street in Toronto. Creators Jason Bone, Scott Chantler, Adam Gorham, Paul Rivoche and J. Torres will be there representing Team True Patriot!

However things don’t seem so bright for the Save Neil the Horse Indiegogo Campaign. Which is currently at just over 10% of it’s desired fundraising target, with only one week left to go. Creator Katherine Collins (formerly known as Arn Saba) joined Robin McConnell recently on the Inkstuds radio show to discuss comics and Neil the Horse, and a lot more — it’s a very thorough interview with lots of reveals and insight, and it is encouraging to hear that Collins (inducted into the Hall of Fame earlier this year) is thinking of returning to do some autobiographical comics and that she is confidant Neil will get reprinted eventually. The good thing about Indiegogo is that they will get to keep the funds raised even if the target is not met, but we are hopeful that more people will help out before the clock runs out, so please consider donating or ordering a book so that we can have another important Canadian comic available for people to find and enjoy. 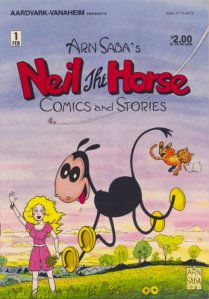