Established in 2004, The Joe Shuster Awards are Canada’s national award recognizing outstanding achievement in the creation of comic books, graphic novels and webcomics. The awards are named after pioneering Toronto-born artist Joe Shuster who, along with writer Jerry Siegel, created the iconic super-powered hero, Superman. The name is used with the approval of the Estate of Joe Shuster – Michael Catron, Estate Agent.

The 15th annual Joe Shuster Awards were presented in Guelph, ON on Saturday, September 14th.

EMILY CARROLL
for BENEATH THE DEAD OAK TREE
(Shortbox)

This award recognizes the works which capture the attention and fascination of young readers, and help to create a passion for life-long reading. Works considered for this award are comic books and graphic novels by Canadian creators that are targeted at readers 14 and under. Nominees for this award are selected by a team of educators led by Jennifer Haines, MA, B.Ed.

The first honours Canadian comic book creators or creative teams who self-published their work but did not have the books distributed by a third party such as Diamond Comic Distributors, Inc. The nominees were selected from individual publications from the previous calendar year submitted for review.

In 2018 a second category was added to recognize the abundance of quality comic book anthology collections being published in Canada that were also being submitted for review.

Gene Day (1951-1982) began his career in the Canadian alternative comix scene. In the seventies he began his own publishing imprint, Shadow Press / House of Shadows and put out over twenty issues of Dark Fantasy, a horror/fantasy/sci-fi digest that featured the early writings of Joe Lansdale, Charles De Lint, John Bell and Charles R. Saunders, amongst others; a short-lived comic publication, Out of the Depths and various other one-shots, portfolios, and prints. Day drew for the Skywald magazines Psycho and Nightmare from 1974, as well as the Canadian comic anthology, ORB, and Mike Friedrich’s independent comics company Star Reach, contributing to the Star Reach anthology, Image and Quack. Day did illustrations for fantasy role-playing games and had a collection of his comic stories, ‘Future Day’, published by Flying Buttress Press as a hardcover graphic novel in 1979.

He was a longtime inker on Marvel’s ‘Master of Kung Fu’ title by Mike Zeck, starting in 1976 and later took over as full penciler on the series. He also inked on the licensed ‘Star Wars’ series, pencilled by Carmine Infantino, as well as ‘The Mighty Thor’ and ‘Marvel Two-in-One’ featuring ‘The Thing’. From 1985 to 1986, Renegade Press published four issues of Gene Day’s ‘Black Zeppelin’, an anthology series primarily featuring stories and painted covers Day completed before his death, as well new contributions by Sim, Bruce Conklin, Augustine Funnell, and Charles Vess. More of his work appeared posthumously in Caliber Comics’ anthology series Day Brothers Presents, which also featured the work of Day’s artist brothers, David and Dan Day.

Dave Sim credits Gene Day as his earliest and most influential mentor and the inspiration for his own self-publishing efforts. Gene Day was inducted into the Canadian Comic Book Creator Hall of Fame in 2007.

THE GENE DAY AWARD FOR SELF-PUBLISHING

TM MAPLE AWARD
(FOR ACHIEVEMENTS OUTSIDE THE CREATIVE)

T.M. Maple was the pseudonym of Jim Burke, who wrote more than 3,000 letters to comic book letter columns between 1977 and 1994. Burke’s letters were quite popular among readers as well as editors, and he wrote prolifically to a diverse number of comic publishing companies and titles.

A leading Canadian comic retailer for over 20 years, Jenn Haines has been an active and vocal supporter of the comics industry and the role comics and comic shops have in their communities. She established the Comics in the Classroom initiative to help educators use comics and graphic novels in their classrooms to improve student literacy. From the initiative’s mandate:

To a reluctant reader or an English Language Learner, a prose text can be incredibly daunting; it is a wall of words, overwhelming to start, impossible to finish. The key to getting these learners to read is to engage their imagination and interest. Comics are a perfect vehicle. They divide up the text into manageable chunks, which are supported by images. These images help readers increase their vocabulary through the connection between words and images. Comics are especially useful for English Language Learners from Korea, China, and Japan, for whom comics are an inherent part of their culture. By offering a style of reading with which these students are familiar, they will be more willing to make the effort to read. The bottom line is getting them to read. Thus, it is better to offer a graphic adaptation of a prose novel covered in class to those reluctant readers, to allow all students to participate in discussions and unit work, rather than have some students fall behind and be unable to participate at all.

She also established the Dragon Award for Comics aimed at Younger Readers that is handed out annually and has worked with educators to review and select the nominees and winners in this category and recognize an important part of the Canadian comics landscape.

We have relied on Jenn as an advisor to the Joe Shuster Awards since their inception in 2004 and in 2019 she served on the jury for the Will Eisner Comic Book Industry Awards.

Named after the Harry Kremer, the original owner of Now & Then Books (in Kitchener, Ontario) and a true patron of comics and comic art. The Canadian Comic Book Creator Awards Association attempts to maintain a list of active comic book stores across the country and a database of recommendations, referrals and secret shopper reports enhanced by online reviews and customer reports.

Located in the heart of west Edmonton, Variant Edition provides a comic shop experience unlike any other, perfect for those looking to discover or rediscover the joys of sequential storytelling. Variant Edition prides themselves on their inclusive environment and innovative recommendation system, which will help you find books you didn’t even know you loved.

Customer reports from Variant Edition rave about the friendly, knowledgeable and personal staff, the attention to providing quality service, the store’s cozy and welcoming atmosphere, and their great and wide selection of comics and graphic novels.

Congratulations to Brandon and Danica for such a great store and another fantastic addition to the Kremer family of Oustanding Canadian comic book retailers. 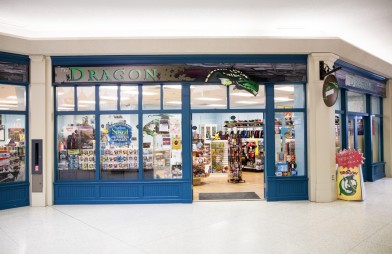 THE DRAGON
of GUELPH, ONTARIO

Eisner Award-Winning Guelph, ON retailer THE DRAGON celebrated their 20th Anniversary in 2018. In 2019 they are being given an honourary Harry Kremer Award for their Contributions to the Canadian comic retail landscape and beyond.

As an awards sponsor and booster, they have self-omitted themselves previously from consideration for the Kremer Award, but unbeknownst to them, the Awards Executive felt that in light of their special anniversary year as well as the JSA’s 15th, and in lieu of Jenn being honoured with the TM Maple Award and the awards being presented in Guelph that all of these factors added up to it being the right time for the Dragon to officially be included to the short list of Canada’s top comic retailers. Congratulations Jenn!

Every year we try to induct into the Canadian Comic Book Creators who have made a lasting impact on the Canadian comics community through their work and career. In some cases it’s by creating an important character, in others it is a large body of impressive work over many decades, or an important legacy as an editor or publisher. In 2019 we honour an iconic editor from the 1970’s as well as three artists who have made their mark on the Canadian scene and international stage since the 1980’s.

One doesn’t have to have won or been nominated for a Joe Shuster Award (founded in 2004) previously in any category to be inducted into the Hall of Fame. Nor does being inducted into the Hall of Fame make you ineligible for nomination for any of the applicable annual award categories if you are still actively creating comics. Many members of the HoF are still very active creating comics (such as Todd McFarlane, Ty Templeton, Ken Steacy, Lovern Kindzierski, and Tom Grummett).

There is only two inclusion criteria – the creator must be Canadian, and that they were actively creating comics as a professional 25 years prior to the date of the awards ceremony year. In the case of this year (2019) that year is 1994.

Alan Hewetson was a Scottish-Canadian writer and editor of American horror-comics magazines, best known for his work with the 1970s publisher Skywald Publications, where he created what he termed the magazines’ “Horror-Mood” sensibility. He went on to become a publisher of city magazines in Canada.

Gerhard is the professional name of a Canadian artist known for the elaborately detailed background illustrations in the comics series Cerebus the Aardvark.

Dale Keown is a Canadian comic book artist, known for his runs on The Incredible Hulk and his creator-owned book, Pitt.