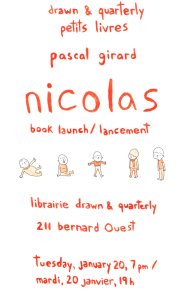 Looking for something to at do this mid-January too cold to be outside- yet can’t stand to stay at home- Tuesday evening? So excited by inauguration that you must take part in something cultural? Come by Librairie Drawn & Quarterly tonight for the launch of NICOLAS: a new D+Q book by Pascal Girard.

We are very excited to have Pascal at the store tonight giving a presentation!

(Please note: this is an English translation of the French language version published by Mecanique Generale in 2006) 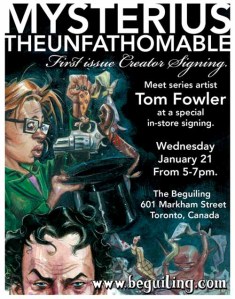 The Beguiling is proud to welcome Ottawa cartoonist Tom Fowler, to sign copies of his new creator-owned series Mysterius The Unfathomable. Tom will be dropping by The Beguiling on the day of the book’s release, Wednesday January 21st, to sign and sketch for fans.

Written by Jeff Parker (X-Men: First Class, The Interman) and published by Wildstorm, Mysterius The Unfathomable is a neat-sounding series about a series’ of calamities that befall the new magical assistant to Mysterius, a washed-up stage magician who is secretly a sorcerer supreme… of a sort.