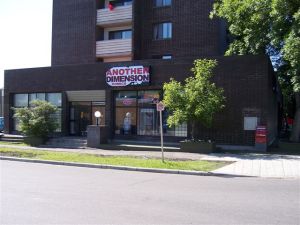 Favorite Comic Book, published in the past few months: Incognito #1

What are you excited about for this coming year? What are your plans for the next 12 months?

After more than a quarter of a century, you would think we would be all set but the store is a never ending work in progress. This year we plan to add more shelving in order to better display our growing inventory of trade paperbacks, refurbish our back issue area and implement a new point-of-sale system.

Watching our customers grow up, get married and now bring their children in to the store to discover comic books for themselves.

What has been one of the biggest challenges?

Staying ahead of a constantly changing industry. When I first entered the business, trade paperbacks didn’t exist and now they comprise over 30% of our sales. The comics industry is almost completely different now from the way it was it 1983 and it continues to evolve. In order to survive (and thrive) our business needs to be ready to evolve along with it.

Because I love comics. At the age of 13, I met John Byrne at a local comic store and had an epiphany. Comics weren’t just a hobby for me, I needed to be a part of it. Realizing that I had no artisitic talent, I decided I would be better suited to selling comics rather than making them. 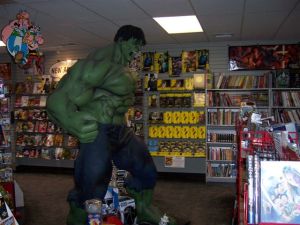 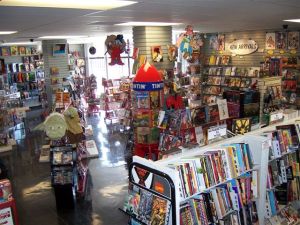 What percentage of your business is comics compared to the peripherals of a ‘culture store’?

80% comics and trade paperbacks, 20% everything else.

What are your Best selling books? What books do you find yourself recommending the most?

Most commonly, we find ourselves recommending the old standbys like Watchmen or the Dark Knight Returns along with modern classics such as Fables, Y The Last Man, Preacher, Sandman or Walking Dead. Every customer is different so the better we get to know someone the easier it becomes to recommend something new.

What comic/manga would you recommend for an adult interested in returning to comics
(superhero / non-superhero)?

Tastes are as varied as people so first we ask a few questions about what types of books or movies they enjoy which helps to steer them towards the right comic books for their particular interests. For a fan of science fiction we might recommend Y The Last Man or Transmetropolitan while a fantasy reader might like Fables or Sandman. For others it might be Dark Tower, Buffy or Hellboy. For an out of touch super-hero fan we might suggest Kingdom Come, Ex Machina, Invincible or the Authority. It might take a little effort to narrow things down but finding just the right book for someone can get them hooked all over again.

It is, unfortunately, still on our “to do” list but will hopefully become an integral part of our business in the near future.

This may seem like an odd answer but our area of expertise is “comic books”. As many stores have diversified into other sidelines such as games, cards, models, etc., we remain focussed on comics. While we do carry other merchandise including toys, statues, posters and clothing we try to concentrate on items directly related to comics or comic book properties. By concentrating on our core products, as well as having a staff with a diversity of interests, we are able to answer questions and offer recommendations on everything from the newest Indy breakout hit to the best stories of the Silver Age. 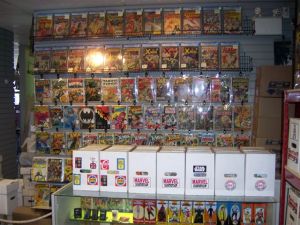 The local comic book scene happens every day in our store! Riley Rossmo, artist of Proof (monthly, and on time since October 2007, from Image Comics) works the counter several days a week. While not working on Proof pages, he has been known to offer advice to many up and coming young artists.

Absolutely! Free Comic Book Day is our busiest day of the year and has been a key component of our company’s growth over the last several years. Every FCBD has been busier than the last as it steadily becomes better known as an annual event by the general public. I can’t think of any other promotion that does more to nurture future comic book readers and nothing could be more important for our future.

Our selection. Comic stores shouldn’t be catalog showrooms and customers should be able to browse through books without having to commit to pre-orders months in advance so we do our best to have the items people want in stock when they want them. I’m not sure if it’s possible for a single store to stock everything but we try to come close with thousands of different trade paperbacks in stock. 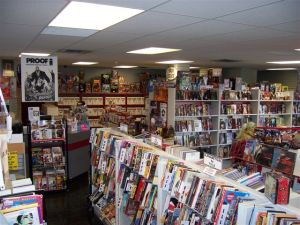 Besides Free Comic Book Day, we work with and provide sponsorships for several local schools, libraries, film festivals and other organizations throughout the year. The most unusual would be for the last several years, we have enjoyed working with a local group that holds Zombie Survival Training sessions. Considering that the Walking Dead is one of our best selling series, it seemed only natural to join in on the fun and help out by promoting their events.

Have the last few years of Hollywood film releases changed your customer base?

Successful adaptations of comic books to film have been a tremendous boon to our industry. In particular, non-superhero movies such as 300, Sin City, Ghost World and American Splendor have helped to educate the public about the breadth of material available which has driven many new customers to our store. The growing acceptance of comic books has also begun to narrow the gender gap in our customer base which is now roughly 30% female.

Graphic Novels have been a growth product for large bookstore chains, does this affect your customer base or business?

I believe that, in some ways, the bookstore chains have replaced newsstands of the past as a feeder system for Direct Market comic shops. With the growing acceptance of comic books as a legitimate entertainment medium among the general public, many people gain their first exposure to comics through the Graphic Novels section of their local bookstore. We find that increasingly, as new readers begin exploring the medium their interest soon outgrows the limited selection available in most bookstores and we do our best to attract those new readers to our store.