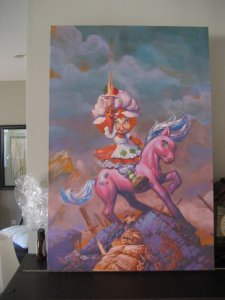 Newsarama talks to David Finch about his entry for this Saturday’s “Gag Me With a Toon 2: Harder, Faster, Radder” art show in Los Angeles.

For a look into the process of creating the painting, check out Finch’s blog.. Finch writes:

I’m working on a Strawberry Shortcake on My Little Pony, all done Frazetta style. It’s going to be a ridiculous looking painting, so I’m having a blast with it. I’ve put up an image of what I managed to get drawn while watching tv last night. I’ll put up progress as I go along. The drawing still needs some skulls, spears, maybe some heads on sticks….we’ll see. I want it to be very dark and angry. Too much fun for words. Also, the final painting will be much larger on canvas, so I’ll be able to give the picture a lot more room to breathe than what I’ve got on paper here.

The show is May 2, and it opens at 7pm. I really hope that some of you can make it to the show. It’s going to be a lot of fun with good people, and I’m going to bring some copies of my new sketchbook that I’ll give out to the first few people who say they came because they read about the show in my blog.