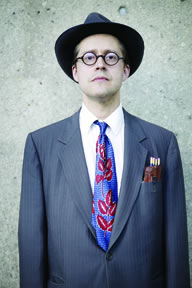 Seth is the cartoonist behind the series Palookaville and the novels, It’s A Good Life If You Don’t Weaken, Wimbledon Green, Clyde Fans, Bannock, Beans And Black Tea and Vernacular Drawings. Seth serialized George Sprott (1894-1975) in the New York Times Magazine, which will be a book in 2009. As a designer, Seth has worked on The Portable Dorothy Parker, The Complete Peanuts and Doug Wright: Canada’s Master Cartoonist. Seth has exhibited throughout the world in a variety of group and solo shows. His work frequently appears inside and on the cover of the New Yorker. He lives in Guelph, Ontario with his wife and three cats and rarely leaves his basement.