Shary Boyle is a multimedia artist whose work includes drawing, painting, sculpture and performance. Constantly traveling, she has set up temporary studios across North America and Europe, working and exhibiting in Berlin, Paris, Los Angeles, Chicago, New York, Nova Scotia, Vancouver and the Yukon. Born in Scarborough, Ontario she is now based in Toronto. Her work has been published in magazines and books such as The Story of Jane Doe (Random House), The Walrus, The National Post, Starship, Maclean’s, Toro Magazine, Saturday Night Magazine, J&L Books, Girls Who Bite Back (Sumach Press), Scheherazade (Soft Skull Press) and Kramers Ergot 7 (Buenaventura Press). 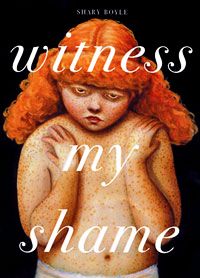 Her graphic novel, Witness My Shame, was published back in 2004 by CONUNDRUM PRESS (nominated for Outstanding Canadian Publisher in 2007 and 2008) and it exhibited one of the many areas of creative endeavour that this versatile talent has worked in over the years. Between 1997 and 2001 she created sixteen genre-defying mini books that helped to fortify her independent artistic vision — staying up all night photocopying her drawings, collating and stapling them at home to be handed out anywhere and to anyone. The drawings were imperfect, confrontational and urgent and meant freedom from art-world sanctioned venues of presentation. The small book format was perfect for spilling all sorts of dirty and hilarious secrets. The works were mini stories of major subjects, unfolding in a beautifully paced sequence of revelations and Witness My Shame re-presented the majority of these bookworks as a graphic novel. Each one forms a chapter, a visual story which is part of a larger sequential narrative.

Last month the SOBEY ART AWARD was presented and Boyle was chosen to represent Ontario amongst the finalists competing for this prestigious prize. She was one of five shortlisted talents that spanned all across Canada and included — for the West Coast and Yukon: Luanne Martineau; for the Prairies and The North: Marcel Dzama; for Québec: David Altmejd; and for the Atlantic: Graeme Patterson. The Sobey Art Award, Canada’s preeminent award for contemporary Canadian art since 1992, was organized by the Nova Scotia Art Gallery and is given to contemporary Canadian artists under the age of 40. Contenders must have exhibited in a public or commercial gallery within the past 18 months to qualify.

While not ultimately the final choice for the top prize Shary was one of the runner-ups for this esteemed award and was presented with a cash award of $5,000 and is a true testament to the wide ranging artistic talent exhibited by so many Canadians that have worked in the field of sequential art. The JOE SHUSTER AWARDS would like to thank Ms. Boyle for being an outstanding representative for the province of Ontario in this competition and congratulates her on a fine effort and much success in her future endeavours.