Tim Morris is the owner/operator of The Comic Book Collector in London, Ontario. The CBC has a long history in London, being one of the oldest comic shops in Canada. When I attended UWO I would haunt the store and talk with then-(second)-owner, Steve Jewitt. Steve turned me on to a few books back in those days, the biggest being I, Lusiphur/Poison Elves and From Hell. Since then, Tim has bought the business. While Dundas Street doesn’t have the same charm it once did, once they straightened out that S curve, The Comic Book Collector’s new location, about a block East, is a great space. The store looked great when I visited in summer ’09.

Years in Business: 1979 to present. 30 years in business with 3 owners over that time.

How did you choose your store name?

I’m the third owner of the shop and so didn’t have any input into the naming. It fit in with what Eddy Smet (the original owner) wanted. We were the first comic specific shop in London.

Editor’s note: From the History of the CBC “We chose to call the store The Comic Book Collector both because we thought this was an appropriate name for several reasons and also because we wanted to have a name that would clearly identify what the store was about.”

Favorite Comic Book, published in the past few months:

Blackest Night from DC. Geoff Johns has concocted a pretty cool story with this one. 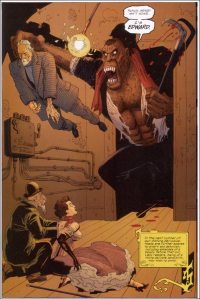 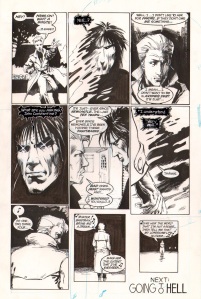 What are you excited about for this coming year? What are your plans for the next 12 months?

New Iron Man movie is going to be very hot. Alice in Wonderland with Johnny Depp should prove to wonderfully weird. And of course Free Comic Book Day.

I’m the boss. If it goes right or wrong it’s my fault/problem.

I got tired of doing stuff for other people. I decided it was worth the time and effort to take over the store and bring it back towards its glory days. 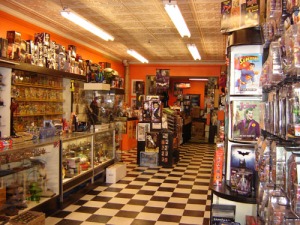 What percentage of your business is comics compared to the peripherals of a ‘culture store’?

Our main business is still comics though the percentage of new to old has changed over the years. Back issues sales have taken a decidedly back seat compared to when the store first opened.

What are your Best selling graphic novel books?

Over the past year Watchmen was definitely number 1. Sandman, Preacher, the Ultimate line from Marvel (Spidey, X-men, Ultimates) have been fairly consistent sellers. Robert Kirkman’s Walking Dead continues to draw an ever growing audience. Fables and Jack of Fables are both strong sellers as well.

What books do you find yourself recommending the most?

Any and all of those mentioned above plus Y: the Last Man, Transmetropolitan, Sin City, Hellboy and B.P.R.D.

The Marvelous Land of Oz from Marvel and almost any of the BOOM! Kids books (Disney, Muppets, Pixar related)

What comic/manga would you recommend for an adult interested in returning to comics?

Wow, so many good titles with small readership. Two books spring to mind. Both very well written. Fables from Vertigo and Walking Dead from Image. Both of these have well woven tales. As far as a manga title goes, consulting with our sister store Neo Tokyo, Rob says Eden and, It’s a Wonderful World from DH Manga.

We don’t do any online selling at this time but the web page is used to let people know what’s new at the shop as well as for posting our upcoming events. As soon as possible on Wednesday we post all the newest books in the shop. This gets sent out to all our subscribers so they can check to see what’s up.

We cater to the gamer geeks that cross over to comics. We have the largest selection of single figures for Heroclix, Star Wars, and D&D minis in the area. We also have some for Monsterpocalypse and World of Warcraft. We run regular events for most of these miniature games as well.

Over the years there have been a few folks self publishing some very small stories. The most successful indie in the area I think is a writer/artist team of sister and brother, Alison and A. Jaye Williams producers of The Sorcerer’s Children series.

Yes. Absolutely. There are 6 comic shops in London. Five of us take part in a cross-over event for FCBD. We all supply passports to those that come and create a prize pool of various cool items. Everyone has to visit each of the stores to get a stamp and then can put their name into a draw for goodies from the prize pool. This cross-over hopefully shows folks that we’ve got the best shop with the coolest stuff. Last year we had more than 600 people through the store.

Our customer service. We try to chat people up to find out what they like to read or play and then point them to the right products. It doesn’t make sense to ignore or be rude to a potential new customer (male, female, young or old). We try and treat everyone on an equal friendly basis.

Our FCBD events have been the most fun. We’ve had costumed heroes at the shop, done game displays and demos, given away door prizes, and had a few local artists in the shop doing sketches. We also run regular Games Workshop, Heroclix, and Star Wars Minis events every month.

Have the last few years of Hollywood film releases changed your customer base?

Not really. It may have brought in a few lapsed collectors but overall we haven’t seen a big change from it.

Graphic Novels have been a growth product for large bookstore chains, does this affect your customer base or business?

The large book stores may carry some of the same product but they generally lack the product knowledge of these items. I’m sure we’ve lost some sales to their online stores but this is mostly because they continue to offer deep discounts hoping the customer will buy other products.

3 thoughts on “Comic Retailers – The Comic Book Collector (London, ON)”