David Finch, Yanick Paquette are everywhere again this month. Throw in some Manapul, Lemire, Kerschl, Stewart, Staples and St. Aubin and you have December’s offerings from DC Comics…

BATMAN, INC. #2
Written by GRANT MORRISON
Art and cover by YANICK PAQUETTE & MICHAEL LACOMBE
1:25 Variant cover by ANDY KUBERT
The dynamic new era of Batman continues! The Dark Knight and Mr. Unknown – the Batman of Japan – go up against Lord Death Man. It’s going to be a fight to the end that could see the failure of Batman, Inc. before it’s even begun!
Retailers please note: This issue ships with two covers. Please see the Previews Order Form for more information.
On sale DECEMBER 8 • 32 pg, FC, $3.99 US 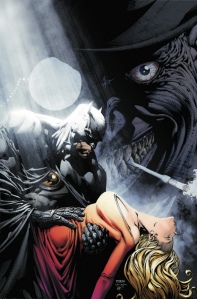 BATMAN: THE DARK KNIGHT #2
Written by DAVID FINCH
Art by DAVID FINCH & SCOTT WILLIAMS
Cover by DAVID FINCH
1:25 Variant cover by ANDY CLARKE
Batman faces the Penguin in the search for his childhood friend Dawn Golden…but what The Dark Knight finds sends him on a far darker and more desperate path. Now he’s forced to reach out to Etrigan, the Demon for help – a favor that may come at too high a price!
Retailers please note: This issue ships with two covers. Please see the Previews Order Form for more information.
On sale DECEMBER 29 • 32 pg, FC, $3.99 US

KNIGHT & SQUIRE #3
Written by PAUL CORNELL
Art by JIMMY BROXTON
Cover by YANICK PAQUETTE & MICHAEL LACOMBE
Cyril and Beryl have the fight of their lives on their hands when Shakespeare’s most evil monarch, Richard III, returns! And he’s brought with him a cloned army of all the worst Kings of England, intent on taking back the country through the use of social networking! Yes, that’s the plot!
On sale DECEMBER 8 • 3 of 6 • 32 pg, FC $2.99 US

RED ROBIN #18
Written by FABIAN NICIEZA
Art and cover by MARCUS TO & RAY MCCARTHY
To infiltrate the computer systems of a Russian industrialist tied to the mysterious Unternet, Red Robin must stop a vengeance-driven vigilante named Promise from killing the oligarch while making sure his former ally Red Star doesn’t stop him!
On sale DECEMBER 8 • 32 pg, FC, $2.99 US

ACTION COMICS #896
Written by PAUL CORNELL
Co-feature written by NICK SPENCER
Art by PETE WOODS
Co-feature art by RB SILVA
Cover by DAVID FINCH
Part 1 of a 2-part crossover with the Secret Six! Lex Luthor doesn’t want to get his hands dirty fighting Vandal Savage (that Black Ring energy ain’t gonna find itself!), so he hires Savage’s daughter Scandal and her Secret Six team to take the immortal villain down for him! Continued in SECRET SIX #29!
And in the hit new JIMMY OLSEN co-feature, Jimmy signs up for a “Win a Date” auction, but much to his surprise, so does his ex, Chloe Sullivan! While Jimmy ends up on a date with CrazyPants McGee, Jimmy’s archrival snags Chloe! D’oh! And wait, are those wedding bells we hear? Better hope they don’t toll for thee, Olsen!
On sale DECEMBER 29 * 40 pg, FC $3.99 US

SUPERBOY #2
Written by JEFF LEMIRE
Art by PIER GALLO
Cover by phil noto
1:10 Variant cover by GUILLEM MARCH
The vegetation of Smallville is out of control, and all evidence points to Poison Ivy as the cause! Superboy’s friend Simon thinks there might be more to this than meets the eye, but he’ll have a hard time convincing Superboy of that now that he’s in the thrall of Ivy!
Retailers please note: This issue will ship with two covers. Please see the Previews Order Form for more information.
On sale DECEMBER 8 * 32 pg, FC, $2.99 U

SUPERMAN/BATMAN #79
Written by CHRIS ROBERSON
Art by JESUS MERINO
Cover by FIONA STAPLES
Get ready to go back to the 853rd century as SUPERMAN/BATMAN visits the world of DC ONE MILLION! What dangerous foe threatens to destroy both the 853rd and 21st centuries? Find out here in the first part of a 2-part story by Chris Roberson (I, ZOMBIE) and Jesus Merino (JUSTICE SOCIETY OF AMERICA)!
On sale DECEMBER 22 * 32 pg, FC, $2.99 US

BRIGHTEST DAY #15-16
Written by GEOFF JOHNS & PETER J. TOMASI
Art by IVAN REIS, PAT GLEASON, ARDIAN SYAF, SCOTT CLARK and JOE PRADO
Covers by DAVID FINCH & SCOTT WILLIAMS
1:10 Variant covers by IVAN REIS
The hottest series in comics blazes on as the legacy of the new Aqualad is forged and the extent of his powers is revealed! Plus, Aquagirl joins the battle, and Firestorm seeks out the Justice League’s help!  Retailers please note: These issues ship with two covers each. Please see the Previews Order Form for more information.
Issue #15 on sale DECEMBER 1 Issue #16 on sale DECEMBER 15 32 pg, FC, $2.99 US

THE FLASH #9
Written by GEOFF JOHNS
Art and cover by FRANCIS MANAPUL
1:10 Variant cover by SCOTT KOLINS
BRIGHTEST DAY rushes forward! Now, make way for Hot Pursuit – the latest speedster to come out of the Speed Force! He’s here to make sure no one breaks the speed limit – hero or villain! And just wait until you see whose face is under Hot Pursuit’s helmet… Retailers please note: This issue will ship with two covers. Please see the Previews Order Form for more information.
On sale DECEMBER 29 • 32 pg, FC, $2.99 US

ADVENTURE COMICS #521
Written by PAUL LEVITZ
Co-feature written by JEFF LEMIRE
Art by GERALDO BORGES & MARLO ALQUIZA
Co-feature art by MAHMUD ASRAR & JOHN DELL
Cover by SCOTT CLARK & DAVID BEATY
The rebuilding of the Green Lantern Corps in the 31st century starts here! Now set in “contemporary” Legion times, this issue tells an all-new tale starring the last survivors of the fabled Corps. Their next recruit will shock you!
In The Atom’s co-feature, the Colony continues its assault on Ray Palmer with more shrinkable suicide bombers!
On sale DECEMBER 1 • 40 pg, FC, $3.99 US

TEEN TITANS #90
Written by J.T. KRUL
Art and cover by NICOLA SCOTT & DOUG HAZLEWOOD
1:10 Variant cover by KARL KERSCHL
It’s mayhem at the cafeteria as Headcase and the Feral Boys run wild! Can the Teen Titans pull themselves together long enough to overcome this combined threat – or will Damian once again be their downfall?
Retailers please note: This issue ships with two covers. Please see the Previews Order Form for more information.
On sale DECEMBER 29 * 32 pg, FC, $2.99 US

BATMAN: THE RETURN OF BRUCE WAYNE DELUXE EDITION HC
Written by GRANT MORRISON
Art by CHRIS SPROUSE, FRAZER IRVING, RYAN SOOK, YANICK PAQUETTE, LEE GARBETT, GEORGES JEANTY KARL STORY and MICK GRAY
Cover by ANDY KUBERT
Grant Morrison’s best-selling multipart Batman epic continues with this collection of the six-issue miniseries!Witness Bruce Wayne’s adventures across time as he is swept through the time stream, from the ancient days that predate history itself through epics set in the times of pirates and the Old West, through his triumphant return to present day Gotham City!
On sale FEBRUARY 2 • 224 pg, FC,
7.0625” x 10.875”, $29.99 US

THE FLASH: THE DASTARDLY DEATH OF THE ROGUES HC
Written by GEOFF JOHNS
Art by FRANCIS MANAPUL and SCOTT KOLINS
Cover by FRANCIS MANAPUL
The Fastest Man Alive must solve the murder of one of his greatest villains and protect his other foes from an elusive killer in this hardcover pulled from THE FLASH #1-6 and THE FLASH SECRET FILES 2010!
Racing out of BLACKEST NIGHT, The Flash returns to his life in Central City – but when one of his Rogues Gallery of foes turns up murdered under mysterious circumstances, it’s up to The Fastest Man Alive to solve this bizarre crime and protect those who are targeted by the elusive killer.
On sale FEBRUARY 9 • 208 pg, FC, $19.99 US

ASSASSIN’S CREED: THE FALL #2
Written by KARL KERSCHL & CAMERON STEWART
Art and cover by KARL KERSCHL & CAMERON STEWART
The monster-hit, historical fantasy/sci-fi Assassin’s Creed video game from Ubisoft continues with a stunning 3-issue series written and illustrated by acclaimed creators Karl Kerschl (WEDNESDAY COMICS, ADVENTURES OF SUPERMAN) and Cameron Stewart (BATMAN AND ROBIN)!
The comic book companion to the hit videogame series continues as Daniel Cross explores his mysterious past and his connection to the modern-day Order of Assassins. Meanwhile, his ancestor Nikolai Orelov prepares a dangerous siege on a Templar research station in remote Siberia – a mission that concludes with the awesome and devastating Tunguska Event!
On sale DECEMBER 1 • 2 of 3 • 32 pg, FC, $3.99 US • MATURE READERS

FRINGE: TALES FROM THE FRINGE TP
Written by ALEX KATSNELSON, CHRISTINE LAVAF and MATTHEW PITTS
Art by FEDERICO DALLOCCHIO, SHAWN MOLL, DAVID LAPHAM, FIONA STAPLES and others Photo cover
Explore the world of the hit TV series Fringe in these tales from the 6-issue miniseries! Each story focuses on a major player in the series or a bizarre encounter with some of the weird science surrounding the show’s mythology!
On sale JANUARY 19 • 144 pg, FC, $14.99 US 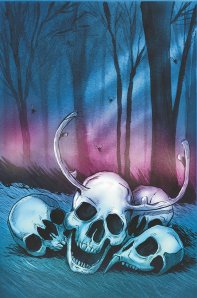 SWEET TOOTH #16
Written by JEFF LEMIRE
Art and cover by JEFF LEMIRE
It’s war! Jepperd’s army storms the militia gates and all hell breaks loose. But can he control the forces he’s set into motion – or will their frenzy destroy Gus before they can even be reunited? The action kicks into high gear, and the world of SWEET TOOTH will never be the same.
On sale DECEMBER 1 • 32 pg, FC, $2.99 US MATURE READERS