Canadian publisher KIDS CAN PRESS continues to work with innovative creators from across the country to produce great graphic novels for young readers. So far KCP have released four graphic novels of note in 2010 that will certainly be strongly considered for the 2011 Joe Shuster Awards. 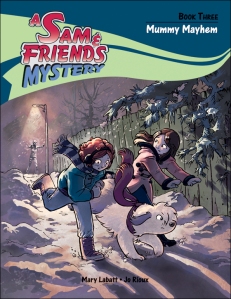 Mummy Mayhem: A Sam and Friends Mystery by Mary Labatt and Jo Rioux
Sam loves a spooky mystery, but when this dog detective finds herself on the run from an ancient curse, is it more than she can handle? When Sam notices a strange, lumpy figure wrapped in white walking by her house every day, she doesn’t think much of it. Then Sam’s human friends Jennie and Beth recount the story of a mummy’s curse they learned about at a museum exhibit. Could the weird figure wrapped in white be a mummy on the rampage? Young graphic novel readers will furiously turn pages to find a surprising solution to this mystery.
Grades: 2 to 5
Ages: 7 to 10
© 2010
BW • 6 1/2 x 8 1/2 • 96 pages
Hardcover $16.95 – ISBN 978-1-55453-470-8
Paperback $7.95 – ISBN 978-1-55453-471-5 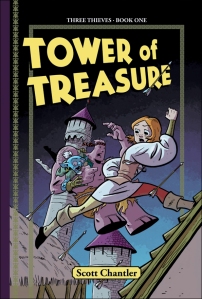 Three Thieves: Book One – Tower of Treasure by Scott Chantler
As an acrobat in a traveling circus, 14-year-old orphan Dessa Redd flies through the air with ease. Still, she is weighed down by troubling memories. But when her ragtag circus troupe pulls into the city of Kingsbridge, Dessa feels a tickle of hope. Maybe here in the royal city she will finally find her twin brother — or the mysterious man who snatched him away when they were just children. Meanwhile, Topper, the circus juggler, recruits Dessa and the circus strongman, Fisk, for the job of robbing the royal treasury. Hungry and desperate, both agree, setting off a series of adventures that will take the three thieves from one end of the world to the other in search of Dessa’s long-lost brother. Scott Chantler’s fast-paced story will engage readers while his bold-lined art with richly detailed backgrounds is a tribute to classic comic books.
Grades: 4 to 6
Ages: 9 to 12
© 2010
4-color • 6 x 9 • 112 pages
Hardcover $17.95 – ISBN 978-1-55453-414-2
Paperback $8.95 – ISBN 978-1-55453-415-9 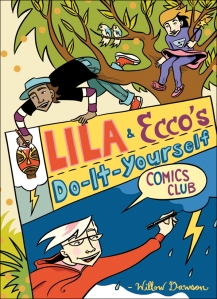 Lila and Ecco’s Do-It-Yourself Comics Club by Willow Dawson
Twelve-year-olds Lila and Ecco are obsessed with comics. Every summer, they dress up as their favorite characters to attend the local comic book convention. This year, after they stumble into a workshop of comics creators, Lila and Ecco come to an exciting realization — they can make their very own comic books! Join Lila and Ecco as they embark on their exciting and rewarding do-it-yourself adventure. Along the way, readers will see how comics can be used to share stories with their friends and say what they want to say. They’ll also learn how to harness ideas and inspiration; create believable characters and stories; illustrate motion, suspense and time passing; tips and step-by-step instructions on inking, coloring, lettering, cover art and design, binding comics and much, much more.
Grades: 3 to 6
Ages: 8 to 12
© 2010
BW • 7 1/4 x 10 • 112 pages
Hardcover $16.95 – ISBN 978-1-55453-438-8
Paperback $7.95 – ISBN 978-1-55453-439-5

One thought on “2010 Graphic Novels from Kids Can Press”