As we start to look ahead to 2011, let’s see what Marvel Comics has to offer in January.

NEW AVENGERS #8
Written by BRIAN MICHAEL BENDIS
Pencils & Cover by STUART IMMONEN
Epic in scale and fraught with danger at every turn, Luke Cage and Jessica Jones face their most challenging adventure yet…a date?! Plus: another illustrated chapter of the oral history of the Avengers!
32 PGS./Rated A …$3.99

AGE OF X: ALPHA #1
Written by MIKE CAREY
Pencils by TBD
Cover by CHRIS BACHALO
Variant Cover by OLIVIER COIPEL
Mutantkind’s final war starts here.
If you don’t know which side you’re on, check your DNA.
32 PGS./Rated A …$3.99 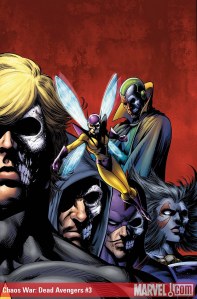 CHAOS WAR: DEAD AVENGERS #3 (of 3)
Written by FRED VAN LENTE
Pencils & Cover by TOM GRUMMETT
CHAOS WAR tie-in!
This is it! The last stand of Earth’s Mightiest Fallen Heroes, the “late” Avengers against the combined might of Grim Reaper, Nekra, and the war machines of the Chaos King. They’ll learn the hard way: EVEN THE DEAD CAN DIE! The Vision makes his last stab at humanity! Will Dr. Druid be seduced again by Nekra’s charms? Will Captain Mar-Vell sacrifice all for his comrades? The Swordsman makes his final choice between heroism and villainy! All this and the most poignant ending of the year!
32 PGS./Rated T+ …$3.99

X-23 #5
Written by MARJORIE LIU
Penciled by WILL CONRAD
Cover by KALMAN ANDRASOFSZKY
X-23’s search for her soul continues! What does Mr. Sinister have to do with Laura’s past…and how is MISS SINISTER trying to influence her future? Caught between a dead man and a dangerous woman, Laura must decide what she’s willing to sacrifice for answers. GUEST-STARRING GAMBIT!
32 PGS./Parental Advisory …$2.99

X-MEN #7
Written by VICTOR GISCHLER
Penciled by CHRIS BACHALO
Cover by TERRY DODSON
Variant Covers by TERRY DODSON & CHRIS BACHALO
Blank Variant also available
“PROTECT AND SERVE,” PART ONE
It’s a new age for the X-Men. Cyclops and company have declared it a time to be heroes. Wherever a citizen is in need, there’s an X-Man on the job. But strange rumors have come to the attention of the X-Men, and Storm and her team are off to New York City to investigate. What do they find in the dank sewers beneath Manhattan? Only New York’s favorite wall-crawler has the answers.
32 PGS./Rated T+ …$3.99

NEW MUTANTS #21
Written by ZEB WELLS
Penciled by LEONARD KIRK
Cover by DAVE WILKINS
“The Rise of the New Mutants”
The stunning conclusion of Zeb Wells’ run on New Mutants is here. Everything set in motion from #1 comes around here as the full force of the X-Men is brought down on Project Purgatory. But will it be in time? The full power of the Elder Gods is in the hands of General Ulysses. Will the power of Legion be enough to turn the tide? Part 2 (of 2).
32 PGS./Rated T+ …$2.99

X-FACTOR #213
Written by PETER DAVID
Penciled by VALENTINE DE LANDRO
Cover by DAVID YARDIN
In the aftermath of the battle with Hela, the team is in upheaval. One member leaves…another arrives…Rictor and Rahne finally have it out over the identity of her baby’s father. Guaranteed to be the most emotional issue of X-Factor this month!
32 PGS./Rated T+ …$2.99 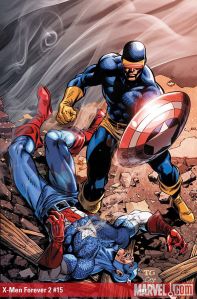 X-MEN FOREVER 2 #15 & #16
Written by Chris Claremont
Pencils by Andy Smith & Ramon Rosanas
Covers by Tom Grummett
SERIES FINALE! A PERFECT STORM concludes with a battle royal in the heart of Wakanda…and all bets are off! Will your favorite X-Man make it out of the rubble alive? Only X-legend Chris Claremont knows!! It’s the mutant super-team vs. Earth’s Mightiest Heroes!!
32 PGS./Rated A …$3.99

X-MEN: FALL OF THE MUTANTS HC
Written by LOUISE SIMONSON, CHRIS CLAREMONT, MARK GRUENWALD, ANN NOCENTI, PETER DAVID & STEVE ENGLEHART
Penciled by BRET BLEVINS, JUNE BRIGMAN, MARC SILVESTRI, KERRY GAMMILL, WALT SIMONSON, SAL BUSCEMA, KIERON DWYER, JOHN ROMITA JR, TODD MCFARLANE, JOHN BOGDANOVE & KEITH POLLARD
Cover by ALAN DAVIS
The body count rises higher than ever as the X-Men and their allies face war on every front! The original X-Men have formed X-Factor, and they come up against their deadliest challenge yet in Apocalypse and his Horsemen, including the all-new Archangel! The New Mutants lose one of their own! And after the Marauders slaughter the Morlocks, they take on the X-Men — and the survivors will be asked to sacrifice themselves to stop the evil Adversary! Featuring tie-ins starring Captain America, Daredevil, the Hulk, the Fantastic Four and Power Pack! Collecting NEW MUTANTS (1983) #55-61, UNCANNY X-MEN #220-227, X-FACTOR (1986) #18-26, CAPTAIN AMERICA (1968) #339, DAREDEVIL (1964) #252, FANTASTIC FOUR (1961) #312, INCREDIBLE HULK (1968) #336-337 & #340 and POWER PACK (1984) #35.
824 PGS./Rated A …$99.99
ISBN: 978-0-7851-5312-2
Trim size: oversized

STEVE ROGERS: SUPER-SOLDIER PREMIERE HC
Written by ED BRUBAKER
Penciled by DALE EAGLESHAM
Cover by CARLOS PACHECO
Steve Rogers was America’s first Super-Soldier – Captain America – and he’s fought for his country since World War II. Now a face from the past reappears, a woman that cannot be alive because Steve watched her die! Steve has fought for so long, and lost so much — is his past coming back to haunt him now? Or could this be the plot of an old enemy who controls nearly everything he touches, including Steve’s mind? From multiple Award-Winning Captain America scribe Ed Brubaker and acclaimed artist Dale Eaglesham comes a book no Cap or Avengers fan will want to miss! Collecting STEVE ROGERS: SUPER-SOLDIER #1-4.
112 PGS./Rated T+ …$19.99
ISBN: 978-0-7851-4878-4
Trim size: standard 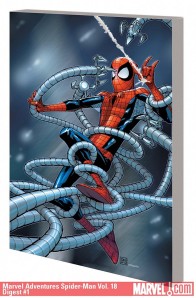 MARVEL ADVENTURES SPIDER-MAN: SPECTACULAR DIGEST
Written by PAUL TOBIN
Penciled by ROBERTO DI SALVO
Cover by KARL KERSCHL
The battle with Bullseye is over, but where is Spider-Man? Sophia “Chat” Sanduval and the Blonde Phantom scour the city in a desperate attempt to find Spider-Man before his time runs out, and he numbers among the fallen in the battle with the man who doesn’t miss. Also featuring Dr. Octopus, Kitty Pryde,, Wolverine and more! Collecting SPIDER-MAN #5-8.
96 PGS./All Ages …$9.99
ISBN: 978-0-7851-4560-8
ENLARGE

AVENGERS: CITIZEN KANG TPB
Written by ROY THOMAS
Penciled by LARRY ALEXANDER, GEOF ISHERWOOD & HERB TRIMPE
Cover by DAN PANOSIAN
In the unassuming town of Timely, Wisconsin, the Vision has disappeared, and it’s up to the Fantastic Four and the Avengers to save him! But Timely is connected to Kang’s city of Chronopolis, which spans the entire history of the Earth and is guarded by the deadliest warrior’s of every age, the Anachronauts! Can the Avengers and the Fantastic Four stop battling each other long enough to defeat Kang and the conniving Terminatrix? Guest-starring Gilgamesh and Dr. Druid! Collecting CAPTAIN AMERICA ANNUAL #11, THOR ANNUAL #17, FANTASTIC FOUR ANNUAL #25 AND AVENGERS ANNUAL #21
232 PGS./Rated A …$24.99
ISBN: 978-0-7851-5301-6 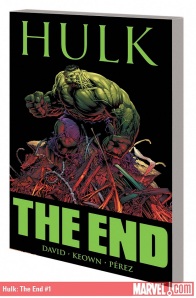 HULK: THE END TPB
Written by PETER DAVID
Penciled by DALE KEOWN & GEORGE PÉREZ
Cover by DALE KEOWN
Chronicling the final days of the Green Goliath! Peter David and Dale Keown, creative team on some of the Hulk’s most memorable tales, reunite to produce this searing vision of the future in which Bruce Banner, the Incredible Hulk, is the last man on Earth. It’s the Hulk’s final battle, as “The Last Titan” wrestles his inner-demons in order to discover his place in a dying world – if only he can survive! Plus: The testing of the first Gamma Bomb thrust upon Robert Bruce Banner that which he would come to believe would be his greatest nightmare: his unwilling transformation into the Incredible Hulk. He believed wrong. Now, having been dragged into the future – into a post-holocaust, dystopian world – Bruce Banner discovers that his nightmare has a whole new name: the Maestro. This is a nightmare that only Hulk can end. For he knows that he himself is responsible for the presence of the evil Maestro. The future, our future, and the Incredible Hulk will never quite be the same. And neither will you. Collecting INCREDIBLE HULK: THE END and INCREDIBLE HULK: FUTURE IMPERFECT #1-2.
160 PGS./Rated T+ …$16.99
ISBN: 978-0-7851-5100-5

SIEGE: DARK AVENGERS TPB
Written by BRIAN MICHAEL BENDIS
Penciled by CHRIS BACHALO & MIKE DEODATO
Cover by MIKE DEODATO
As night falls on Norman Osborn’s Avengers, their darkest hour begins! The origin of the Sentry is revealed. Bullseye commits an unspeakable act of murder. Victoria Hand wonders if she’s gone too far. And as he plans the final stages of his Siege of Asgard, Norman Osborn begins to succumb to the evil legacy of the Green Goblin — a mind-altering malady that may just be the thing that propels him to ultimate victory! Win or lose, these are the final hours of the Dark Avengers! Collecting DARK AVENGERS #13-16 and DARK AVENGERS ANNUAL #1.
136 PGS./Rated T+ …$19.99
ISBN: 978-0-7851-4812-8

SIEGE: NEW AVENGERS TPB
Written by BRIAN MICHAEL BENDIS
Penciled by MARKO DJURDJEVIC, MIKE MAYHEW, STUART IMMONEN, MIKE MCKONE, BRYAN HITCH
Cover by STUART IMMONEN
The Avengers are on the run! The villainous Norman Osborn was the unlikely hero of Earth’s victory over the alien Skrulls in the Secret Invasion, and he has used his newfound political cache to set himself up as the head of H.A.M.M.E.R., the new national peacekeeping force. Driven underground by the Superhuman Registration Act, the Avengers must battle Osborn behind the scenes. Osborn has anointed the Hood as the new kingpin of crime, and the Avengers must take on a gauntlet of the Hood’s cronies — including the Mandrill, the Griffin and the Purple Man. All the while, Osborn’s mania increases as he leads H.A.M.M.E.R., the U.S. military, and his own Dark Avengers in an invasion and siege of the fabled city of Asgard. Collecting NEW AVENGERS #61-64, NEW AVENGERS ANNUAL #3, THE LIST – AVENGERS and NEW AVENGERS FINALE.
224 PGS./Rated A …$24.99
ISBN: 978-0-7851-4578-3

X-FACTOR VOL. 10: SECOND COMING TPB
Written by PETER DAVID
Penciled by VALENTINE DE LANDRO
Cover by DAVID YARDIN
Mutantkind is barely hanging on. Their numbers have dwindled dangerously low, and the outside world has turned against them. Many believe their race’s salvation lies in the return of the young girl called Hope, the first mutant birth in ages. But the X-Men weren’t the only ones anxiously awaiting her return. A super-Sentinel from the future, Bastion, is committed to the complete and utter destruction of mutantkind, including Hope. To succeed in his genocidal plan, he has tasked the creator of the original Sentinels with hunting down and destroying X-Factor. With the team spread out across three continents, can Jamie Madrox, Banshee, Longshot and the rest defend themselves from the brutal Mutant Response Division? Collecting X-FACTOR #204-206 and NATION X: X-FACTOR.
112 PGS./Rated T+ …$14.99
ISBN: 978-0-7851-4369-7

X-MEN FOREVER 2 VOL. 1 BACK IN ACTION TPB
Written by CHRIS CLAREMONT
Penciled by TOM GRUMMETT & RODNEY BUCHEMI
Cover by TOM GRUMMETT
With the drastic events from the end of the previous volume, the X-Men are shaken to their very core. As they start to pick up the pieces, they are confronted by a new enemy, more powerful than any other they’ve ever faced. Collecting X-MEN FOREVER 2 #1-5.
120 PGS./Rated A …$16.99
ISBN: 978-0-7851-4664-3