We’re only 19 days into May and there’s already a TON of stuff up for you to check out over at Whazamo! Below are links to everything posted so far:

WHAZAMO! Ontario Graphic Novel Month is an online comics celebration brought to you by Open Book: Toronto. Whazamo! showcases the talented graphic novelists and illustrators published by Ontario publishers and draws attention to the new stars of the Canadian graphic novel and comic book scene.

In its third year, Whazamo! features profiles of comic creators and graphic novel news, as well as a series of original literary comics by some of Canada’s finest cartoonists. The series is curated by Vepo Studios, who have also produced a short documentary for Open Book that follows the creative process of the cartoonists.

The Graphic-Novelist-in-Residence is Ian Daffern. You can find his page here.

Whazamo! is presented in collaboration with the Organization of Book Publishers of Ontario and it welcomes you.

COMICS in which the artists profiled below select a literary work and pay homage to it in comics form:
MARIAN CHURCHLAND
KALMAN ANDRASOFSZKY
AGNES GARBOWSKA
CHARLENE CHUA
MICHAEL CHO

VIDEOS
COMICS: THE ART OF STORY


MAKING THE WEBCOMICS “A SOFTER WORLD”

VON ALLEN ON THE LIFE OF A GRAPHIC NOVELIST

BORIS AND THE OPEN HOUSE BY KATHARINE MILLER


THE NEXT DAY interview series 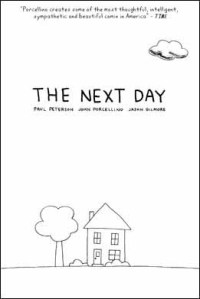 The Next Day is an innovative comics novella from POP SANDBOX, the folks that brought us 2010’s acclaimed KENK: A GRAPHIC PORTRAIT:
Part One: Alex Jansen
Part Two: Paul Peterson
Part Three: Jason Gilmore
On the release party and display at the NFB Mediatheque