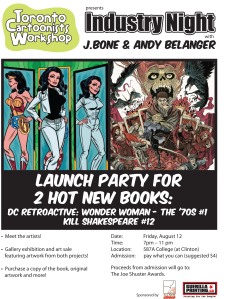 Last night, at the Toronto Cartoonists Workshop at 587A College Street, the TCW, Guerilla Printing, All New Comics and the Joe Shuster Awards held a launch party and art show event for two Toronto-based creators: Andy Belanger (for Kill Shakespeare 12 – which unfortunately has been delayed to an August 23rd release date) and J. Bone for DC Retro-Active: Wonder Woman – The 70’s #1. 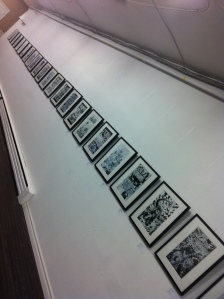 The night started out, interestingly enough, by our group passing renowned cartoonist Seth and his wife on College Street on our way into the school/gallery space. Seth didn’t attend the event, but it was a surprise to see him and it seemed an interesting start to what ended up being a great night for comics in Toronto. 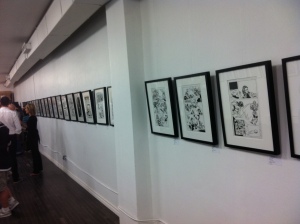 The TCW’s Eden Bachelder and Kellam Templeton-Smith had already framed and hung the 53 pieces submitted by Andy and J. for display, with the entire issue of J.’s Wonder Woman issue on the East wall, and an assortment of pieces from Kill Shakespeare and other work by Andy along the West wall. Attendees were greeted by the absolutely stunning (and massive!) original art by Andy for the cover of Kill Shakespeare #12 as they came in. 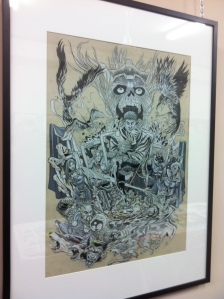 Between 7 and 11 the place was packed with fans, art lovers, a few retailers and a number of comics professionals — a true industry night!

J. had even prepared some new limited prints for the evening featuring Wonder Woman, one of which was a redo of the cover for DC Retroactive Wonder Woman #, but done in J’s on style instead of the Mike Sekowski homage style he was asked to apply to the published comic. The other print – Wonder Woman soaring with an eagle was another stunner. I would personally LOVE to see more Wonder Woman comics done by J. Bone in this style. Who’s with me on this? Maybe we can put some pressure on DC’s Eddie Berganza, Bob Harras and Dan Didio when we see them here in a couple of weeks for Fan Expo Canada! Here’s a closer look at that cover recreation – great job on the colouring as well J.!: 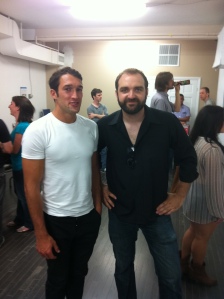 Andy Belanger (right) and a friend

Over at Andy’s table he had a selection of issues of Kill Shakespeare and other comics he had worked on, including the first trade paperback collection. He also had a couple of great prints for sale, one a silk screen print featuring the art from that Kill Shakespeare 12 cover, as well as one of an amazing collaboration he did with another talented Toronto-based artist – Michael Cho. 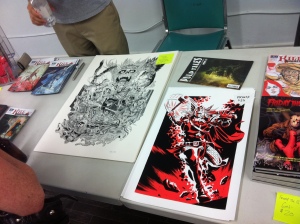 I saw the piece originally on display in Calgary, and surprisingly it did not sell there. I am happy to report that it has found a home — my apartment. Here’s a closer look at that piece:

It was quite the crowd and I was really impressed with the installation and the overall atmosphere was very laid back and a lot of fun. The free beer certainly helped! Event sponsor Guerilla Printing also had a table, run by Darwin Santos and Tyrone McCarthy:

We are happy to report that we had over 100 visitors and we raised 340 dollars in admission fees for the 2012 Joe Shuster Awards budget. People were very generous! 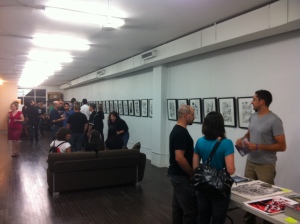 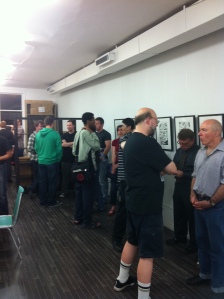 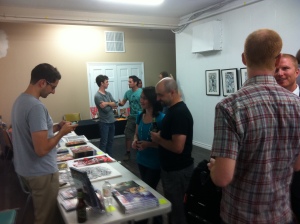 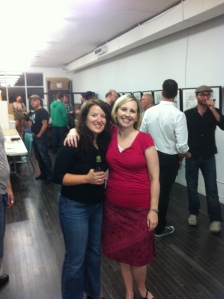 See you in late September at our next Industry Night event – The launch party for THE FLASH #1 by Francis Manapul!

Big thanks to everyone at the TCW – particularly Sean Menard, Regina Menard, Eden Bachelder and Kellam Templeton-Smith!

Big thanks to Peter Fisico for being our financial sponsor!

Big thanks Darwin Santos and Tyrone McCarthy and their staff at Guerilla Printing!

Big thanks to everyone at the JSA who came down and pitched in – Allison Covey, Andrew Walsh and Tyrone Biljan. Special thanks to Debra Jane Shelly for assisting!

And finally HUGE thanks to the stars of the night: J. BONE and ANDY BELANGER! 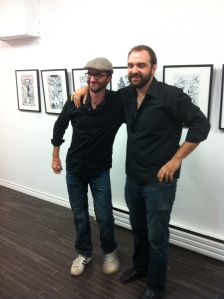