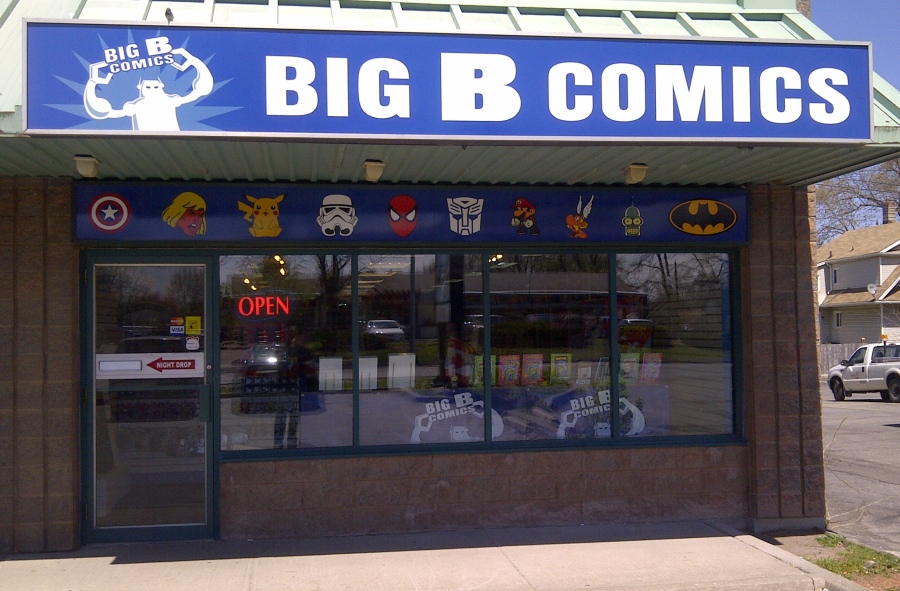 The new Niagara Falls Big B Comics had a soft opening on April 16th but there will be an advertised grand opening on May 5th – Free Comic Book Day. Some key fixtures were not in place when the photos (above and below) were taken – but they say that the full and proper fixtures as well as product should all be in place by FCBD.

The focus of the store is twofold, as owner Walter Durajlija explains:

“Firstly, we want to service the Niagara region with the best possible service and selection of comics, graphic novels, manga, related toys, t-shirts and merchandise, we’ll also focus on gaming – most of the Niagara region is a 15 minute drive to the store and we selected Lundy’s Lane because it is literally 3 minutes off the highway and easy to get to for those in Welland, St. Catharines, Fort Erie and of course the Falls”

“Secondly, we chose the “strip” portion of Lundy’s Lane to attract tourists as well – this is a very heavily travelled tourist strip lined with coffee houses, restaurants, big outlet malls and hotels – we plan to cater to the tourists by focusing a section of the shop to feature Canadian comic books – current Canadian creators and their work will be prominently featured, we’ll have exclusive Captain Canuck merchandise as we have entered into an agreement with Richard Comely to produce new exclusive Captain Canuck merchandise. We’re also designing a small display on Canadian Whites – showcasing Canada’s Golden Age comic history.”