More stuff happening in Toronto this weekend — although this is a TCAF event (and I don’t plan on highlighting any of the other many TCAF events here on the site — I recommend you visit the OFFICIAL TCAF SITE and look under events for that list) we have always highlighted the TCAF Awards – The Doug Wright Awards as a separate event to draw attention to them. This year the DWAs return for their 9th annual ceremony on Saturday night in Toronto.

They’ve also recently been posting “9 for 9” interviews with the 2013 nominees on the website. 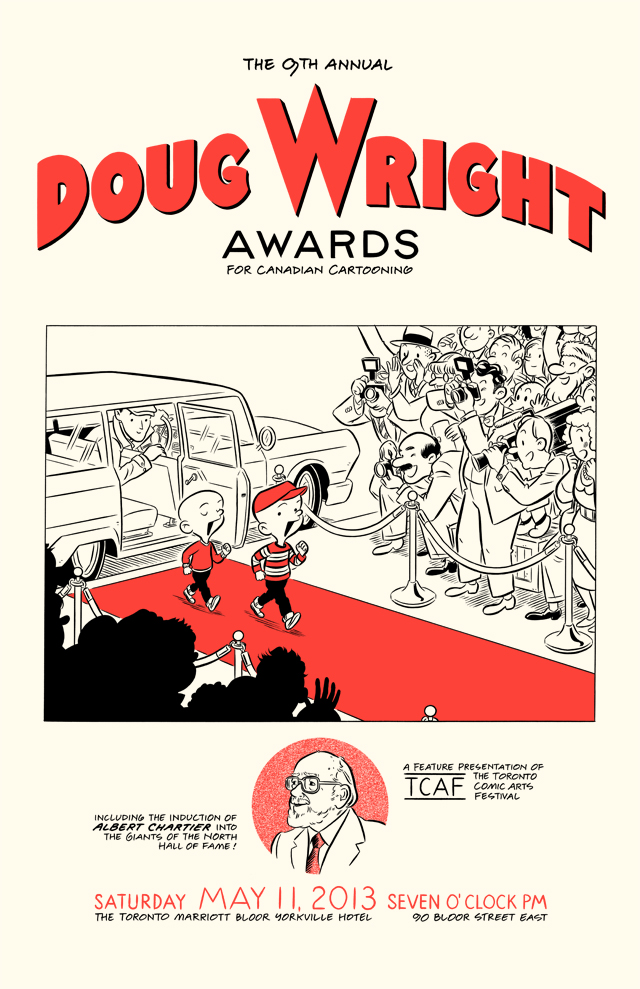 What: The 2013 Doug Wright Awards ceremony
Where: Marriott Bloor Yorkville Hotel, 90 Bloor Street, Toronto, Ontario
When: Saturday, May 11, 2013 at 7:00 p.m.
Admission: FREE!
The Poster: This year’s poster was drawn by 2012 Doug Wright Spotlight Award winner Ethan Rilly. Copies of the poster will be available for sale during TCAF and at the ceremony.

The nominees for the 2013 Doug Wright Award for Best Book are:

The nominees for the 2013 Doug Wright Spotlight Award (a.k.a. “The Nipper”) which recognizes Canadian cartooning talents worthy of wider recognition are:

And the nominees for the 2013 Pigskin Peters Award, which recognizes the best in experimental or avant-garde comics are:

Also, ALBERT CHARTIER will be inducted into the Giants of the North (Canadian Cartooning Hall of Fame).