Canadian Whites have come to mean books produced and published in Canada as a result of the Canadian government’s implementation of the War Exchange Conservation Act (WECA) which banned the import of American comics into the Canadian wartime economy of World War II. WECA was implemented by the Canadian government in December of 1940. The act was repealed in 1946 allowing US imports to resume, the Canadian industry died out shortly thereafter. ~ Walter Durajlija (Big B Comics)

Here at the Joe Shuster Awards, you can’t discuss English Canadian comic books without some sort of recognition for the 5+ years when English Canada actually had it’s own comic book publishing industry. It’s something that has never quite been repeated in our history, despite a slow boom of self-published books in the mid-to-late 1970’s and early 1980’s and a handful of Canadian publishers over the years like Aardvark-Vanaheim, Renegade Press, Vortex, Drawn & Quarterly, Red 5 Comics, Conundrum Press and Koyama Press.

On the flip side, French Canada (specifically Quebec) has had an active comics publishing industry for the past few decades.

In this article I’ll touch briefly on the short but important war years when we had our own nascent industry that was heavily influenced by the American industry, when Canadian artists didn’t have to go to New York or Chicago to make it as a comic artist or writer. They could do it in Toronto or Vancouver.

One of the more common things you’ll hear about Canada’s Golden Age of Comics is that when something comes up to raise awareness in them, such as the current crowdfunding campaign for the reprinting of Nelvana of the Northern Lights is “I had no idea these books existed”.

Well, it’s not exactly a secret that Canada had it’s own comic-book industry in the 1940’s, created when the Mackenzie King government banned many US publications from entering Canada – including comics and pulps. It’s just not something that is talked about much, although there’s been a lot of interest in this area over the last few years with the movement to catalog all of the comics, stories and artists for proper reference and now a movement to properly reprint them.

Four publishers dominate the majority of this period:

Bell Features – Commercial Signs of Canada, founded in 1939 in Toronto as a commercial art business, the company found success when it started publishing comics in September 1941, and changed its name to Bell Features in 1942. It folded in 1953 under increasing competition from American publishers, but stopped publishing comics in 1947. Bell was the most prolific of the Canadian publishers, issuing nearly twenty titles, and its comics were a big success, achieving combined weekly sales of 100,000 copies by the end of 1943. Bell provided work for over fifty freelance creators, including René Kulbach, Ted Steele, Manny Easson, Jack Tremblay, Mel Crawford, Leo Skuce, Doris Slater and Patricia Joudrey. Art director Adrian Dingle brought his character Nelvana of the Northern Lights to Bell Features, and he would also create other characters like the Penguin while there. Another key artistic figure at Bell was Leo Bachle, and his character Johnny Canuck. Other popular characters were Edmund Legault’s Dixon of the Mounted, Jerry Lazare’s Phantom Rider, Edmond Good’s Rex Baxter, and Fred Kelly’s Doc Stearne (later revived by Michael T. Gilbert as Mr. Monster).

Hillborough Studios (later absorbed into Bell Features) – founded in Toronto by Adrian Dingle, the brothers René and André Kulbach, and an anonymous investor. Their flagship title was called Triumph-Adventure Comics, and featured the most famous character of what has been called the Golden Age of Canadian comics—Dingle’s Nelvana of the Northern Lights, the first Canadian female superhero, who debuted several months before Wonder Woman. After seven monthly issues, Dingle brought Triumph-Adventure to Bell Features in early 1942 and became that company’s art director. He was followed most of the Hillborough staff.

Maple Leaf Publishing – Their first outing, Better Comics #1, is thus considered to be the first true Canadian comic book. Based out of Vancouver, Maple Leaf is known for creating original comic characters and stories, and did not rely on American scripts as some other publishers, namely Anglo-American, did. Vernon Miller’s Iron Man is the first Canadian superhero, debuting in Better Comics #1. Notable titles included the aforementioned Better Comics, as well as Big Bang Comics, Lucky Comics and Rocket Comics.

It’s probably the only time in our history when we actually had something resembling a comic book industry, with hundreds of comics turned out by that handful of publishers between 1941 and 1946 in black and white on white paper (hence they are referred to as the “Canadian Whites” or “Whites”. With the slow repeal of that legislation after the end of World War II the industry could not compete with the colour comics from the US, as well as a general decline in interest in superheroes in general in both countries and a growing interest in crime and horror comics that would come to a head in the early 1950’s.

Some holdout Canadian comics publishers, mainly Superior Publishers who arrived when the whites were dying off, continued well into the 1950s, but by that decade they were mostly creating Canadian editions of US comics, which are collectible today because of their relative rarity by comparison to the US counterparts. By the late 1950’s there was no real need for branch plant comics, and Superior closed shop.

Many of the “Canadian Whites” era creators are in the Canadian Comic Book Creator Hall of Fame:

So after the fall of our WW2-era comics industry, most of the great creators of the “whites”  moved into other artistic pursuits such as a commercial advertising, teaching and the fine arts. None continued as comic book artists after 1947.

As in the years before the “whites” when Canadian artists like Hal Foster, Palmer Cox and Joe Shuster found their comics success south of the Canadian border, the years after the era of the Canadian Whites saw little activity by Canadian creators within Canada, other than some popular strips and gag cartoons in magazines and newspapers. Generally one had to move to New York or Chicago to find success with American publishers or comic strip syndicates to work as a comics artist. One such success was Hamilton’s own Winslow Mortimer (1919-1998).

It’s not until the late 1960’s and the early 1970’s that Canadians started to create their own comics again, and that is generally accepted to be our “Silver Age”. 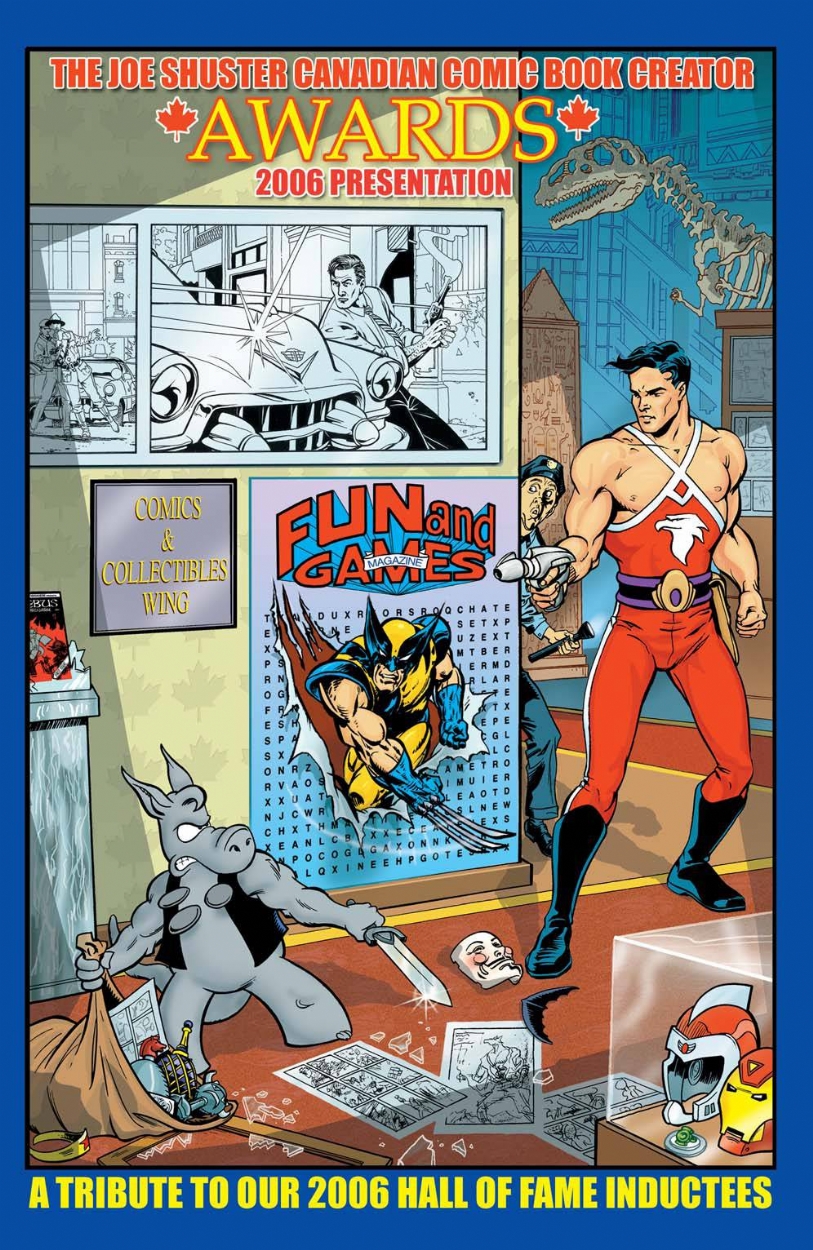