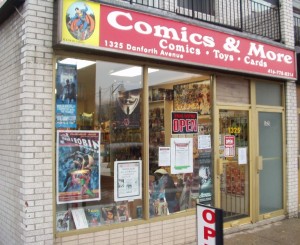 Rob Charpentier is the owner/operator of Toronto’s Danforth Avenue store Comics & More. Comics & More has been around in various incarnations since 1987.

Unfortunately, back in the summer Rob was diagnosed with progressive brain cancer, a situation that he recently shared with his friends and customers on his store blog a few weeks back.

Not sure what you may have heard around the store, but the reason you haven’t seen much of me lately is due to my hospitalization, Just a warning to anyone reading these words, if you suffer from occasional migraines and they suddenly increase in intensity and frequency – get to a damn hospital quick. A brain tumor is not something you can tough out.
It has been strange what has been going through my head lately, well, other other than radiation and scalpels that is. I am worried that I might not see the end of Grant Morrison’s Multiversity series – even if they manage to keep it on schedule – it’s six months away. More of a worry if the store will still be open at that point. I have limited options; I can try and sell, shut it down or just kind of fade away. I will not be able to work in the store again but I will try and do what’s fairest for all the loyal customers who’ve been with me over the years.
i will try to update you more often

Rob is currently undergoing palliative treatment and is under observation. Friends, like his former business partner Peter Fisico (online retailer All New Comics) who have visited him say that he remains positive and upbeat. At this point, the future of the store is uncertain, as it’s unlikely that Rob will be able to return to the store. Thankfully friends and staff have been keeping the business going for him.

I’ve known Rob for a long time, mostly from my days as a show promoter, but I have visited his various stores over the years and I’ve always found him to be a friendly, warm guy always happy to talk comics and discuss the business of comics retailing and shows. I regret I haven’t seen him for while, since he stopped exhibiting at events, but I know many people who call Comics & More their home store, and everyone in the community is distraught over the news and wishing the best for Rob. It can’t be easy.