Unlike DC, Marvel doesn’t really have many Canadians working for them, and those that are this month are represented mostly in covers and trade paperbacks.

Not sure what happened to the solicitation for the Tom Grummett illustrated Chaos War: Dead Avengers #1.

NEW AVENGERS #6
Written by BRIAN MICHAEL BENDIS
Pencils & Cover by STUART IMMONEN
The shocking battle for our dimension comes to a shattering conclusion; and not everyone will survive!! Who will make the ultimate sacrifice to save us?  Marvel fans will not want to miss this startling chapter in Avengers history. Plus: another chapter in the oral history of the Avengers!
40 PGS./Rated A …$3.99 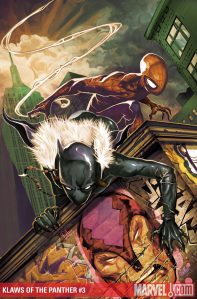 KLAWS OF THE PANTHER #3 (of 4)
Written by JONTHAN MABERRY
Penciled by GIANLUCA GUGLIOTTA
Cover by MIKE DEL MUNDO
Brought to you by NY Times bestseller Jonathan Maberry and artist Gianluca Gugliotta, the Black Panther is tearing her way across the globe in pursuit of Klaw and his AIM minions. The hunt takes her to the urban jungle of New York and into a web of double and triple crosses and cold blooded murder. And Shuri gets some help from an unexpected new ally. Enter: the Amazing Spider-Man!
32 PGS./Rated T+ …$3.99 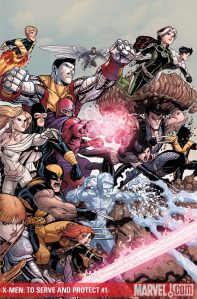 X-MEN: TO SERVE AND PROTECT #1 (of 4)
Written by CHRIS YOST, JOSHUA HALE FIALKOV, & MORE
Penciled by VARIOUS
Cover by NICK BRADSHAW
We’re knee-deep in the Heroic Age and the X-Men
are smack-dab in the center of the Marvel Universe! CHRIS YOST returns to the X-Books to tell a story that pits two fan-favorite X-Men up against a major Spider-Man villain in a four-part story that will run through each issue of this multi-story extravaganza! Who are these X-Men and why are they wearing disguises? Also in this issue, Fantomex and Batroc fight over a stolen diamond, and more!
40 PGS./Rated A …$3.99

NEW MUTANTS #19
Written by ZEB WELLS
Penciled by LEONARD KIRK
Cover by DAVE WILKINS
“FALL OF THE NEW MUTANTS” comes to a close and the New Mutants lose the battle against Project Purgatory. Who has fallen? Who will no longer be on the New Mutants? The most heart-wrenching issue of the series is courtesy of Zeb Wells (AMAZING SPIDER-MAN) and Leonard Kirk (DARK X-MEN, CAPTAIN BRITAIN & MI13). Part 5 (of 5)
32 PGS./Rated T+ …$2.99

X-MEN FOREVER 2 #11 & #12
Written by Chris Claremont
Pencils by Rodney Buchemi
Cover by Tom Grummett
She’s lain claim to Wakanda…now Perfect Storm has her sights set on Genosha! And with Little ‘Ro in her clutches, our mutant heroes are more vulnerable than ever to the wretched weather witch’s wrath. But if anyone can stop the traitorous X-Man-turned-conqueror—it’s the mysterious GHOST PANTHER! Is this the spirit of T’Challa come back for vengeance…or something far, far worse? Only X-Legend Chris Claremont has the answers!!!
32 PGS (each)./Rated A …$3.99 (each)

ULTIMATE COMICS SPIDER-MAN VOL. 2: CHAMELEONS PREMIERE HC
Written by BRIAN MICHAEL BENDIS
Penciled by TAKESHI MIYAZAWA & DAVID LAFUENTE
Cover by DAVID LAFUENTE
Spider-Man and his amazing friends, Iceman and the Human Torch, team up to help the newly powered Rick Jones deal with the crazy changes and responsibilities that come with…power.  But what side of the coin is Rick Jones on?  Is this the birth of a new hero? Or the birth of an ultimate…enemy?? Collecting ULTIMATE SPIDER-MAN #7-14.
192 PGS./Rated T+ …$24.99
ISBN: 978-0-7851-4012-2
Trim size: standard

SIEGE: X-MEN TPB
Written by DANIEL WAY, MARJORIE LIU & KIERON GILLEN
Penciled by GIUSEPPE CAMUNCOLI & NIKO HENRICHON
Cover by SALVADOR LARROCA
Norman Osborn has mounted an attack on Asgard, the home of the Norse gods, and the cataclysmic conflict will affect the entire Marvel Universe ― even the dwindling mutant population. On the front lines of the Siege is Daken, the son of Wolverine and reluctant member of Osborn’s Avengers. As the violent mutant relishes in the blood and metal of conflict, he is confronted by the Norse Fates: Will he accept their offer or pursue his own destiny? Meanwhile, the New Mutant Dani Moonstar must make good on a deal with the goddess Hela by ushering those Asgardians slain in combat to her domain. But when given the power of the Valkyries, can Dani refrain from entering the chaotic fray around her? Collecting DARK WOLVERINE #82-84, NEW MUTANTS #11 and SIEGE: STORMING ASGARD – HEROES & VILLAINS.
136 PGS./Parental Advisory …$15.99
ISBN: 978-0-7851-4816-6

FANTASTIC FOUR BY JONATHAN HICKMAN VOL. 2 TPB
Written by JONATHAN HICKMAN
Penciled by DALE EAGLESHAM
Cover by ALAN DAVIS
An older version of Franklin Richards travels from the future with an ominous warning for his younger sister Valeria: a conflict is approaching, a clash between four extraordinary cities. And now the Fantastic Four, humanity’s premier explorers and imaginauts, launches a series of incredible adventures into four unique and bizarre lands. Deep beneath the Earth’s mantle, the remnant of a mad experiment gone awry begins to rise. From an ancient seascape, the last descendents of a lost kingdom make contact with mankind. In the fabled Blue Area of the moon, a king girds his people for war. And in the Negative Zone, strange and deadly creatures prepare for conquest. Thrust into the center of this conflict are Mister Fantastic, the Invisible Woman, the Human Torch and the Thing — a legendary family, a group of heroes sworn to protect humanity while expanding the limits of knowledge and adventure. Side-by-side with new allies and confronted with menacing foes, it’s the Fantastic Four as they prepare for the War of the Four Cities! Collecting FANTASTIC FOUR #575-578.
112 PGS./Rated A …$15.99
ISBN: 978-0-7851-4541-7