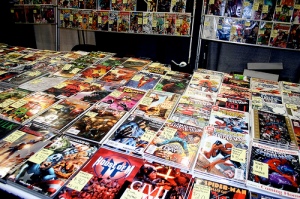 April is sure shaping up to be a busy month! I moved recently, and in-between loads of books and other things I had to take over to my new place, there have been a lot of things going on in the comics world, event-wise. Last weekend saw the coming and going of another Toronto ComiCON Fan Appreciation Event, as well as the brand new Kapow! Con in London, England. Last night it was the Beguiling‘s triple book launch at Clinton’s of Klondike/Reunion/Mid-Life here in Toronto, and Girard and Ollmann continue on to Vancouver today for a book launch at Lucky’s Comics.

Going on right now in Quebec is the FBDFQ – Le Festival de la bande dessinée francophone de Québec and tonight will see the announcement of the winners of the prix Bédéis Causa 2011. Here’s a reminder of who is nominated:

There is also the Prix Albert-Chartier, which goes to a person or organization that has made a mark on the world of Quebecois comics.

Good luck! We’ll have the winners for you later this weekend.

You know, if things had not been so hectic on the home front with the move, and Robert wasn’t busy with our next item I would so be there. It is my plan to be at the FBDFQ in 2012.

Tomorrow sees Guelph, ON’s Kazoo Comics and Zine Expo, and Robert Haines, Jenn Haines (whose store the Dragon is a sponsor), Tyrone Biljan will be there helping out, as will my gal Friday, Deb. Don’t forget the Kazoo CaZE also has Festival Awards! Meanwhile I’m hitting the wandering roads down to the home of the zombie – Munroeville, PA – for the annual Pittsburgh Comicon where I’ll end up meeting fellow JSA-er Chris Owen. Not much that’s Canadian about the Pitt Con, I’m just going to see some comics legends — George Perez, Jim Starlin and the inimitable Joe Sinnott and get some books signed. I should be back in time Sunday to pop by the Artists Help Japan fundraiser taking place from noon on at the Revival Bar on College Street West in Toronto. There are dozens of creators taking part for this worthwhile cause.

Finally, on Monday we should have the last remaining books in to send to our two JSA juries for 2011. Once they receive the books they’ll have until late May to read everything and make their informed selections for the lively debate that is sure to follow as we select our winners for 2011 (to be announced in Calgary on June 18, 2011).

Thankfully next weekend is Easter and, as far as I know, there are no comics events planned! Then it’s back on the road again for me down to the Boston Comic Con with the boys from Comic Book Daily. There’s also a mini-Montreal Comic-Con on May 1, and the following weekend – May 7 – it’s Free Comic Book Day  (we’ll be announcing a full slate of cross-country events before the 7th for you to plan accordingly), as well as the Beguiling‘s giant FCBD special event: TCAF 2011. I think by that time I’ll be ready to take a vacation!